The Space World 2000 demo was a trailer of FMV clips featuring various Nintendo characters running on Nintendo GameCube hardware. While it was not indicative of any forthcoming releases, some of what was seen later materialized into games. This included footage of a battle between Link and Ganondorf, a render of Joanna Dark from Perfect Dark, and clips of what would later become Wave Race: Blue Storm and Luigi's Mansion.

Samus Aran is briefly shown during the demo running through a corridor while being pursued by what appear to be Parasites, before firing a Missile at the screen. The Metroid segment of the demo drew the most applause[1] from viewers of any segment, as the Metroid series had been on hiatus since Super Metroid in 1994. The demo was pre-rendered, using assets as well as the original model of Samus for Metroid Prime, created by Mike Sneath and skinned by Rodney Brunet, with the Arm Cannon created by Ludovic Texier. At the time, Prime was internally referred to as Metroid or Metroid 2003, its estimated release year.[2] 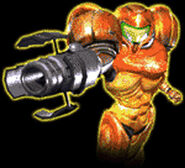 Spaceworld 2000 render.
Add a photo to this gallery

Retrieved from "https://metroid.fandom.com/wiki/Space_World_2000_demo?oldid=264048"
Community content is available under CC-BY-SA unless otherwise noted.