Shoots three Beams at once.

Metroid II: Return of Samus: Chozo Statues in Phase 4 and Phase 7
Metroid: Samus Returns: Statue in Area 4
Super Metroid: Statue in Lower Brinstar
The Spazer Beam, also referred to as the Spazer (スペイザー, Supeizā?) for short, is a beam Samus Aran occasionally obtains during her adventures. When shot, the beam splits into three lasers. This weapon originally appeared in Metroid II: Return of Samus as the Spazer Laser Beam[1] and returned in Super Metroid and Metroid: Samus Returns as the Spazer Beam.

The beam's mechanics differed between the games. In Super Metroid, if one beam hit a target, the other two would disappear as well and the target received the full damage of the three-beamed shot. However, in Metroid II and Samus Returns, the three were separate, and would not do this, exactly as the similar Wide Beam upgrade does. The crab depicted on the upgrade bears a strong resemblance to the Tallon Crab.

In Metroid: Samus Returns, a remake of Metroid II, the Spazer Beam can stack with other beams except for the Ice Beam and Grapple Beam. It is also required to destroy Gigadoras, a three-eyed door-blocking creature that can only be harmed with simultaneous shots to each of its eyes. Metroid: Samus Returns marks the first time that the Spazer Beam is compatible with and can be stacked with the Plasma Beam, and is its first appearance in a 3D game.

"A three way beam with an extremely wide focus is fired when this beam is discharged."

"The Spazer Beam is a three beam attack allowing you to hit objects in a wider range."

Spazer (page 9)
"An invaluable asset against the tougher baddies, the Spazer triples the power of your shots.
Location: Brinstar"

The high-output Spazer Beam fires three beams at once.

The Armory (p. 11)
"What's better than one beam that shoots through walls? How about three simultaneous beams? That's right! The Spazer Beam increases the number of beams you fire from your standard Power Beam. Instead of one simple beam, you fire three like an energy-based fork! A welcome upgrade for any Metroid-hunting bounty hunter."

Walkthrough (p. 116)
"The Spazer Beam changes the Wave Beam so it fires three shots at a time instead of one. Your beams still go through walls and solid objects, but now your shots are more powerful and have an increased spread, so it's much easier to hit your targets. The best news is that the Spazer Beam can destroy Gigadora-covered doors. Whenever you see those purple, three-eyed creatures covering a door, fire your Spazer Beam at their eyes three times and collect whatever goodies are hidden behind them." 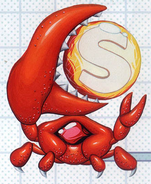 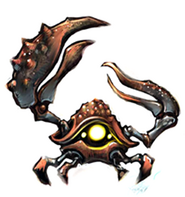 The Spazer Beam in Samus Returns.