Maximum running speed increased significantly
Allows use of the Shinespark
The Speed Booster (スピードブースター, Supīdo Būsutā?) is a power-up commonly found in Metroid games excluding the Prime series. It greatly increases Samus Aran's running speed and allows her to use powerful moves such as Shinespark.

According to the Metroid Fusion and Metroid: Zero Mission Instruction Manuals, the Speed Booster allows Samus to run at "supersonic speeds."

The Speed Booster, as the name suggests, will greatly increase Samus's speed whilst she runs. She also becomes invincible, as noted in the Super Metroid instruction manual, although this is contradicted in-game. In Super Metroid, the Speed Booster would only activate if holding the dash button. In most later games it activates automatically after a certain distance due to the removal of the dash button. In Metroid Dread, it is activated by clicking the left analog stick while running.

The start-up time for the Speed Booster differs in each of the Metroid games that features this upgrade, thus making it a game-mechanic. In Super Metroid it takes about 1 second. In Metroid Fusion and Metroid: Zero Mission it takes about 2 seconds. In Metroid: Other M it takes 5.317 seconds (319 frames).

The Speed Booster is notable for being used in intricate, difficult puzzles for expansions, though it is actually required to advance further in the game on occasion. Also, the Speed Booster has been shown to be quite a powerful weapon: the Dash Attack[1] is in effect while the Speed Booster is active, and it is able to plow through most enemies, rocks, ice walls, chunks of ice that take a similar form of stalagmites that are located in the Cryosphere, and Boost Blocks, which cannot be destroyed with any other weapon, no matter how powerful. Additionally, the Speed Booster allows Samus to run on the surface of water as demonstrated in Maridia in Super Metroid.

Furthermore, the Speed Booster has three notable extra forms: the Shinespark, Ball Spark and a fast, far-reaching Spin Jump. The Shinespark allows Samus to store a Speed Booster charge for a short period of time and then to use that charge to move continuously in one direction (left, diagonal left, up, diagonal right, right). The Spin Jump, quite obviously, is when Samus spin jumps while Speed Boosting; this is most effective when used with the Space Jump, so Samus can jump continuously while maintaining the Speed Boost.

Other M is the first game to reveal how the Speed Booster works. The thrusters on the back of her suit fire and propel her at great speeds, though she must continue running as the thrusters do not provide lift required for her to fly. However, the Samus Screen in Super Metroid categorizes it as a "Boots" upgrade.

The Speed Booster returns in Metroid Dread. It can now be maintained while Samus is landing from a jump, Wall Jumping, and Sliding, and can use Morph Ball even in midair, allowing her to continue moving at high speeds in the opposite direction and under small passages.[2]

The Speed Booster is very useful in the following instances:

"These boots allow Samus to run at a super high speed and make her invincible as she runs through enemies. Blocks with the Speed Booster icon melt away when Samus runs into or over them at super speed."

"Gives Samus the ability to run at supersonic speeds. When at full pelt, she will destroy almost any nasty in her way, as well as certain obstacles. To reach top speed, you need a fair run up, then simply hold down [B] (making sure the X-ray scope is inactive) and press the pad in the appropriate direction. Location: Norfair."

"Dash at supersonic speeds and crash through certain barriers and enemies. Press and hold the Control Pad in the direction you want to dash."

"With this power-up, Samus is able to dash at supersonic speeds and crash through certain barriers and enemies. Press and hold + in the direction you want to dash."

"Steep inclines and wide gaps become minor obstacles when this super boost is activated. A short run at standard speed is needed to set it off."

SPEED BOOSTER
Run for a while in one direction.
You can cause damage by running
into things and climb steep ascents.

"Press and hold +* and move in a single direction for a certain period of time to start to run fast. You can also cause damage to enemies that you run into."

"Effects: Allows Samus to run extremely fast and damage things she impacts.
Controls: Press [D-Pad] in one direction and run for a while."

"After a running start, Samus will pick up the pace and run at great speed. She can then smash through certain obstacles and deal damage to enemies in her path."

Nintendo of America
"Samus’ movement in #MetroidDread is smooth as ever. Pick up the pace with the Speed Booster ability, building speed with the ability to smash through certain obstacles & enemies.

Once in Speed Booster state, she can use Shinespark to soar in a chosen direction with great speed."[3]

Nintendo UK
"Samus’ Speed Booster ability returns in Metroid Dread, allowing her to build up a head of steam and smash through walls. She can also use it to charge the Shinespark and hurtle in one direction at tremendous speed."[4]

"With enough runway, Samus can reach super speeds to destroy walls and enemies in her path. When in the Speed Booster state, activate the Shinespark technique to launch Samus in a set direction."

SPEED BOOSTER
While the Speed Booster is active, you can maintain your momentum even while sliding or wall jumping.

You will automatically vault over terrain up to one block in height when using the Speed Booster, just like when running normally.

Unused scan images from Prime show what appears to be a shinesparking Samus. 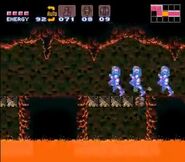 The Speed Booster in Super Metroid.

The Speed Booster in Metroid Fusion.

The Speed Booster in Metroid Dread.

Speed Booster icon shown in Other M when examining a destructible object.

The Core-X possessing the Speed Booster in Metroid Fusion.