Allows Samus to scale walls (events of Metroid II and Samus Returns only) and Spider Ball Tracks in Morph Ball mode. Boost Ball can be used to propel from tracks (since the events of Echoes).

In Metroid II, the Spider Ball is one of the most important upgrades to exploration. It allows Samus to adhere to walls and ceilings when in Morph Ball form, thus allowing her to reach nearly anywhere in the game. However, if Samus is attacked, including from spikes that are lined on some surfaces, the Spider Ball will be canceled and she will be dislodged.

The Spider Ball is acquired in Metroid Prime by defeating Thardus, in Metroid Prime 2: Echoes by defeating the Spider Guardian, and in Corruption in the Powerworks on SkyTown. In these games, the Spider Ball allows the Morph Ball to cling to magnetically conductive ground areas, via electromagnetic capabilities. Normally, it is used to climb specially adapted railing called Spider Ball Tracks. If a Morph Ball Bomb is deployed, the Morph Ball will make a vertical "hop" as if on regular ground, disconnecting her from the rail for a second. If the Boost Ball is used (only in the later two Prime games), she will leap in the opposite direction from the track, often with enough power to shatter thick glass.

The Spider Ball is often used to gain access to hidden areas with a Missile Expansion, Energy Tank, or similar upgrades. Early, simpler upgrades might be a straight shot to the prize, but many involving the Spider Ball require the player to go through complicated puzzles, including the use of Bomb Jumps, Boost Ball leaps, and dropping from one track to another or grabbing onto a side track while falling. There have been a few bosses that required use of the Spider Ball to defeat, notably the Power Bomb Guardian, the Emperor Ing, the Quadraxis, and the Caretaker Class Drone.

In Samus Returns, in addition to spikes there are slippery surfaces that cannot be traversed through using the Spider Ball, thus acting as barriers that impede the Spider Ball and making its use for exploration more limited. Also, unique to this game, planting a Power Bomb while using the Spider Ball will initiate the Power Bomb Cannon move, which is similar to the Ballspark in Metroid: Zero Mission. Although it is depicted here as being able to attach to almost any surface, Spider Ball Tracks do make a brief appearance during the Diggernaut boss battle in which Samus must use the Spider Ball on the Tracks located on the Diggernaut's drill arms to reach a Bomb Slot inside, which destroys each arm. These Spider Ball Tracks rotate, forcing Samus to wait until they line up to access the next track. As a result, the Diggernaut battle is somewhat reminiscent of bosses in the Metroid Prime series.

In Metroid Prime, the Spider Ball greatly alters Samus's Morph Ball appearance. A large dent covers both sides of the Morph Ball and glows with the same color as the core. Transparent glass covers the dent and retains the Morph Ball's roundness. Electricity can be seen in these when attached to a Spider Ball track. Oddly enough, when the Fusion Suit mode is activated, the Spider Ball does not appear on the Fusion Suit's Morph Ball form as it would regularly, though it still allows Samus to climb magnetic surfaces.

In Metroid Prime 2: Echoes, Samus acquires the upgrade while in the Dark Suit. The only change is that the red orbs on the sides are enlarged. It is unknown how, or if, the Light Suit is affected, as the suit has no similarities to the previous one. At the beginning of the game (prior to losing her power-ups), if Samus looks through her inventory to her morph ball modes, it shows that she has the Spider Ball ability at that time. However, it shows a picture of the Dark Suit morph ball even though she was wearing the Varia Suit.

In both Metroid Prime 3: Corruption and Metroid II: Return of Samus, the Morph Ball's appearance is not changed.

In the Prime series, a small band of energy connects Samus to the magnetic rail when activated. This bond is easily broken by the Morph Ball Bombs and Boost Ball.

In Metroid Prime: Federation Force, Samus uses the Spider Ball during the battle against her. The chamber she is fought in has multiple Spider Ball Tracks on the ceiling and walls which she uses in a pattern intended to avoid attacks to her core. After some time, she will roll to the center of the ceiling and drop, creating a massive shockwave when she lands. She will also lay Bombs in her final phase.

"When Samus has assumed the ball shape, she can activate the Spider Ball by pressing down on the Control Pad. This “sticky ball”, gives her the power to move across the walls and ceiling unhindered by gravity. To maneuver, use the Control Pad. To return to the regular ball, press the A Button."

"Magnetic tracks are located around Tallon IV, often leading to secret areas and useful items. Acquire the Spider Ball power-up to travel along these tracks. Hold/release the R button to attach/detach."

"Once Samus finds the Spider Ball, she can magnetically attach herself in Morph Ball mode to specific magnetic tracks that run throughout Tallon IV's environment. To activate the magnet, simply press and hold the R Button. The Morph Ball will stay fixed to the track as long as you hold the R Button—tilt the Control Stick to move along the track and release the R Button when you wish to drop off the track. You can propel yourself upward by laying Bombs while attached to a track." 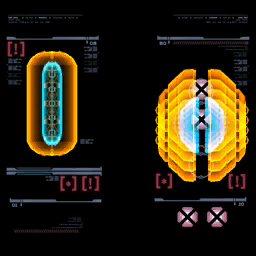 The Spider Ball allows you to move the Morph Ball along magnetic rails.
Press and hold

to activate the Spider Ball ability.

Follow the magnetic rails to explore new areas.
The Morph Ball Bomb can be used to trigger a Bomb Jump while attached to a rail.
You can use the Boost ability to rapidly propel the Spider Ball away from magnetic rails.*

"Once Samus finds the Spider Ball, she can attach herself to specific magnetic tracks. To activate the magnet, simply press and hold the R Button. The Morph Ball will stay fixed to the track as long as you hold the R Button—tilt the Control Stick to move and release the R Button when you wish to drop off. You can propel upward by laying Bombs when attached, or launch out by using the Boost Ball function."

* This sentence is included in Echoes, which otherwise features the exact same entry.

"The Spider Ball can stick to and move along walls and ceilings. While in Morph Ball form, hold [L] to activate."

In terms of gameplay, the limitation to magnetic tracks in the Prime series was likely made to balance out the fact that being able to climb any 3D wall would easily break the game, potentially leading to a great amount of glitches, Sequence Breaking, etc.

Andy O'Neil engineered the Spider Ball in the Prime series.[1]

The Spider Ball in Echoes.

The Spider Ball in Corruption.

The Spider Ball in Return of Samus.