Spikes in the Metroid series are elongated, pointed objects of either metal, stone, or organic matter that cause considerable damage on contact. These first appeared in Metroid II: Return of Samus, and made an appearance later in Super Metroid. Spikes can be found on ceilings, walls, and even on the ground, sometimes forcing Samus to use the Grapple Beam to traverse to the other side. Some spikes are seen to grow out of red or green organic material in Brinstar, which resembles the concealed movement pads of Aether.

Not all spikes are harmful, however. Some are Pit Blocks that appear to be spikes, while others are deactivated and thus cause no harm when touching them. In Maridia, the spikes seen just before Draygon's chamber are fake and seemingly have no physical matter to them, much like an illusion or a hologram that can be passed through effortlessly. In "The Gauntlet", there are Bomb Blocks that are disguised as Spikes, but these spikes are not harmful, and can be destroyed.

A Chozo Statue in the Wrecked Ship contained sufficient strength to simply "walk" through the spikes, destroying them in the process.

Several creatures, such as Zoomers and Geemers, have naturally occurring spikes on their bodies. Thorned roots in the Biosphere are lined with spikes.

Certain expansions in Metroid: Samus Returns are hidden behind tunnels that are lined with red spikes and seem impassable. The only way to get through these spikes is with the Power Bomb Cannon move, which requires the Power Bombs and Spider Ball. 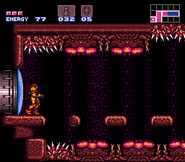 Spikes growing out of organic material in Brinstar. 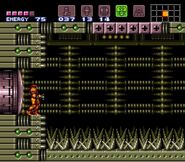 Spikes on the floor of the Wrecked Ship force Samus to traverse with the Grapple Beam.

Samus Aran triggers a trap, causing a spike to impale her left shoulder.