Wikitroid
Register
Don't have an account?
Sign In
Advertisement
in: Pages in need of images, Special Actions, Movement

For other types of jumps, see Jump (Disambiguation).

The Spin Jump is a simple technique in every game of the 2D Metroid series, including Metroid: Other M.

Like its name implies, Samus spins while executing it. It is performed by pressing the jump button while running. This results in far greater jumping distance than a Standing Jump. In Metroid Fusion, Metroid: Zero Mission, and Metroid Dread, it is used to keep the Speed Booster's charge while jumping. The Space Jump in 2-D Metroid games can be considered a continuous Spin Jump. The Spin Jump Attack, Space Jump and Screw Attack can only be used while Spin Jumping.

In Fusion, Zero Mission, Other M, Samus Returns, and Dread, a Spin Jump can be performed out of a normal jump by pressing the jump button a second time.

In Metroid Dread, Mawkin Chozo Soldiers and their robotic counterparts all Spin Jump on various occasions, though the robotic Chozo have a noticeably stiffer jump that they use more rigidly than the X Parasite soldiers and Samus herself. Because Samus was raised by the Chozo, it is likely that they in fact taught her this technique.

The technique seems to be also present in the Metroid Prime series, as many cutscenes showing Samus obtaining an item (particularly Morph Ball upgrades) have Samus jumping and defying gravity by spinning in the air for longer than possible. In addition, in the original Prime game, when fighting Metroid Prime, every time Samus causes it to burrow to another, lower level, there is a short cutscene showing her spin jumping through the hole that Metroid Prime escapes through.

Once Samus has obtained the Screw Attack, she spin jumps in regular gameplay in order to use it. Another instance of the Spin Jump's appearance in the Prime series is in the Metroid Prime 2: Echoes Multiplayer. When battling against others, if Samus does a normal Space Jump, the enemy will see Samus do a Spin Jump, although this does not affect Samus' Visor at all, as if she was doing a normal jump. Aside from use of the Screw Attack, whether the Spin Jump occurs like this in the main story mode is unknown.

"Press the A Button to jump. Move left or right while jumping to perform a Spin Jump."

"Press the A Button to jump. Jump while running left or right to perform a spin jump." 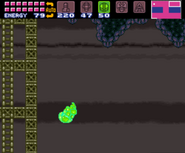