Vulnerable to all weapons-fire
Splinters are common, insectoid creatures that Samus encounters on Aether in Metroid Prime 2: Echoes. Found only in the Temple Grounds, they live in Splinter Cocoons most of the time, and come out of them to hunt and forage. If a being approaches their cocoons, the Splinters within will awaken and go into a state of blood frenzy, rousing other Splinters nearby. This can prove them to be hazardous if the being is traveling alone and unarmed. Their Dark Aether counterparts, essentially Splinters possessed by Ing, were the Dark Splinters; they are believed to have gone extinct after Dark Aether was destroyed.

A large colony of Splinters were nesting in the Great Temple of the Luminoth. They were possessed by the Ing in an attempt to take the last amount of planetary energy from the Energy Controller found in the vicinity, which Samus put a stop to. Whether or not the Splinters were peacefully living with the resident Luminoth is unknown.

Other varieties are the Alpha Splinter and Worker Splinter.

Physically, they are similar to the Zebesian Beetoms and the Hoppers of Bryyo, though their behavior is more similar to that of the Beetles of Tallon IV.

Morphology: Splinter
Predatory insectoid hunter. Splinters are aggressive and dangerous in numbers. Their light armor is no match for your weapons, however.

When it isn't hunting, a Splinter will secrete a protective cocoon around itself and enter a state of hibernation. Localized seismic disturbances will awaken the Splinter, triggering a state of blood frenzy in the process. While in this state, a Splinter emits pheromones that trigger frenzy in all nearby Splinters. Disturbing a pack of sleeping Splinters is not advisable.

Large splinter bodies in the Hive Chamber A. 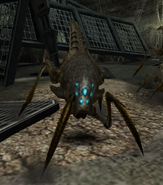 A Splinter in the Industrial Site 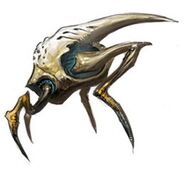 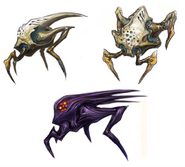 A pair of Splinters with a Dark Splinter
Русский
Community content is available under CC-BY-SA unless otherwise noted.
Advertisement