Dark Beam to fragile shell on back

Sporbs are species of predatory plant found on planet Aether. Sporbs are often seen to grow on walls. They lie in wait until they detect a potential meal and then fire a volley of poisoned needles to incapacitate the prey. After this, the creature extends its mouth from the body to draw the creature into its maw. Sporbs can be found in Torvus Plaza, Abandoned Worksite, and the Underground Tunnel.

Samus can also be grabbed by them if she is in Morph Ball mode. Sporbs are naturally hardy, but are vulnerable to Dark Energy. A Darkling Sporb is a boss in Dark Torvus, known as the Power Bomb Guardian. There is an unused Logbook entry for a Dark Sporb, which points to Darkling Sporbs as a scrapped enemy.

The hanging Sporb sits patiently until a potential meal is detected. A burst of poisoned needles is the Sporb's primary means of attack. It can also extend its body over short distances, gripping small targets with its powerful jaws. Sporbs wither when exposed to dark energy, making them vulnerable to other weapon systems.

Eager to possess new bioforms, a number of darklings seized the chance to take the thorny Sporb as a host.
It has proven to be a good match, as Sporb and Ing have similar temperaments.
The Dark Sporb loses its weakness to dark energy, gaining a vulnerability to pure light energy instead. 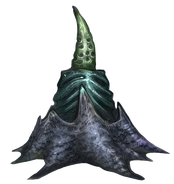 Concept art of a Sporb.
Add a photo to this gallery

Retrieved from "https://metroid.fandom.com/wiki/Sporb?oldid=248393"
Community content is available under CC-BY-SA unless otherwise noted.