Spore Spawn (スポア・スポーン supoa supōn) is a miniboss in Super Metroid. Reached from the top of the large pink room in upper Brinstar, it guards the game's first set of Super Missiles.

Spore Spawn is a gigantic plant that was genetically engineered by the Space Pirates.[1] When Samus enters the room, spores released by indestructible, flower-like bioforms located on the ceiling begin to fill the air and the creature's main body descends from the ceiling to swing back and forth in perpetual figure eights. Its shell is impenetrable to all of Samus' weapons: Spore Spawn can only be damaged when it stops to open its mouth to reveal its glowing core. This opportunity initially appears once every three cycles. When dealt some damage, Spore Spawn turns darker, moves twice as fast, and reveals its core once every six cycles.

It takes five Charge Beam shots to reach Spore Spawn's second stage, and an additional three to kill it. With Missiles, the respective numbers are six and four. Neither the Charge Beam nor a large supply of Missiles is needed, as Missiles can be refilled by shooting the falling spores. The spores themselves do little damage individually, and compared to later enemies, even contact with the Spore Spawn itself doesn't do much damage. However, at this point, Samus will usually have very few energy tanks, so even that small amount of damage can be trouble. Damage to Samus from direct contact can be avoided by staying in a corner in Morph Ball mode, though the floating spores can still be troublesome. However, when Samus stays in Morph Ball mode on top of the the left ledge and stays in the corner, Spore Spawn won't hit her, and the falling spores won't come in contact with her, because that part of the room is not in their flight pattern. This strategy, however, can backfire. Should Spore Spawn reveals his core around the corner Samus is in it will inflict massive damage and possibly prevent Samus from attacking it this cycle.

When the Spore Spawn is defeated, the ceiling will collapse, simultaneously killing the four flower-like bioforms on it. The entire room (along with the background) and the Spore Spawn will dry up, leaving behind a dried husk. The dead Spore Spawn head is one of the few objects in the game that will shake when Wall Jumped onto.

"This creature was genetically engineered by the Space Pirates. Its weak point is its core, which is protected by the plant's hard shell."

Spore Spawn is voiced by Kenji Yamamoto, one of the sound designers.[2]

Spore Spawn's original codename was Eriko Flower, according to Yasuhiko Fujii. The developers felt that Spore Spawn looked like a kusudama, a traditional Japanese paper craft, while "Eriko" came from the TV personality Eriko Kusuta. This name was created by Yoshio Sakamoto.[3]

Early footage of Super Metroid features a green Ripper during the battle against Spore Spawn. This would have added an extra layer of difficulty, as the small animal would have been yet another threat needing to be dodged within the room. Additionally, Spore Spawn's stigma was shown to have disappeared when it was defeated, instead of it remaining as it does in the final game.[4] 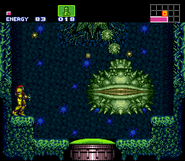 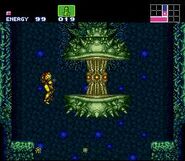 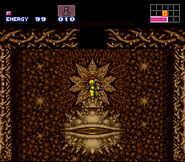