The Spring Ball (スプリングボール Supuringu Bōru) (also known as the Jump Ball) is a power-up that allows Samus Aran to jump in Morph Ball form without Bomb Jumping. It first appeared in Metroid II: Return of Samus, and has appeared in all games since, except for the GameCube versions of Metroid Prime and Metroid Prime 2: Echoes.

First featured on SR388, the Spring Ball is one of the two Morph Ball add-ons (the other being the Spider Ball) originating in Metroid II to have appeared in later Metroid games, although the two only appear together in Metroid Prime 3: Corruption and their New Play Control! ports.

In Metroid: Zero Mission, the upgrade is not mentioned by name, as it is included with the High Jump Boots. The same thing is done in Metroid Fusion, except that both abilities are named.

In Metroid Prime 3: Corruption, the ability is available from the beginning of the game. While not mentioned by name in the inventory or in the instructions booklet, one of the in-game tips explains how to perform a 'Spring Ball Jump' in Norion (in the curved hallway where Samus picks up the second Energy Tank in the game). This version of the Spring Ball does not allow the Morph Ball to jump as high as in the 2-D versions, sending it only as high as a single bomb jump.

The Spring Ball comes with the Morph Ball Bombs, and is lost with the bombs if the latter is lost as well. It should be noted that the Spring Ball makes several parts of the first two games much easier than they originally were (most notably the Spider Guardian boss in Echoes).

In both Metroid II and Samus Returns, the Spring Ball is obtained by defeating Arachnus in an item room in Area 2. Unlike other upgrades in the original game, there is no text for the Spring Ball on the bottom of the screen upon acquisition. As confirmed by Metroid: Samus Returns Official Guide, Arachnus' ability to jump in ball form is due to its possession of the Spring Ball.

In Metroid: Other M, the Spring Ball is usable from the start of the game. It gives far more height than a Bomb Jump in this entry.

In Metroid Fusion, the Spring Ball is included with the High Jump ability, but is called the Jumpball. This is acquired by defeating Zazabi in Sector 2 (TRO).

"This allows Samus to jump while in the ball shape."

"The Spring Ball allows Samus to jump while she is rolled up into a ball."

"Enables Samus to jump in the air while remaining in spherical form.
Location: Maridia."

"The Spring Ball allows you to jump while in Morph Ball form."

Arachnus using the Spring Ball in Return of Samus

The Spring Ball as an item in Return of Samus

Samus using the Spring Ball in Return of Samus

The Spring Ball as an item in Super Metroid 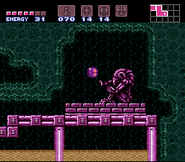 The Spring Ball as an item in Samus Returns
Add a photo to this gallery
Retrieved from "https://metroid.fandom.com/wiki/Spring_Ball?oldid=279381"
Community content is available under CC-BY-SA unless otherwise noted.