Pumping out of lava
Squeept are a species found on the planet Zebes. They propel themselves out of magma with what appears to be a jet-like function and can be frozen in order to be used as temporary platforms. In the Famicom version of Metroid, they could jump at varying heights.[1]

In Metroid, purple Squeept are indestructible while red ones are not.

"They emerge from the lava and sink back into it. It takes more than one blast of the normal beam to destroy them."

"Jumps out of the lava, then falls back in again. Red ones can be destroyed with a Missile."

"It jumps out of lava suddenly. It moves monotonously up and down, and never attacks." 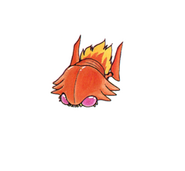