Location of a UA Expansion, access to Weapons Complex, Stronghold Void 2 (via Stronghold Portal) and Ascension.

The Stasis Bunker is a room on the Vesper Defense Outpost. It appears in Metroid Prime Hunters.

In this series of rooms, Samus can find two Alimbic Artifacts. There are also EnemySpawners spawning Voldrums here. In two major rooms, Samus will notice there are several Guardians floating in stasis tubes, with some Dead Guardians jamming a door. Once she has collected the first Artifact, the Enemy Spawners begin to spawn Voldrums. Then, after collecting the second one, up to four Guardians are released from each containment chamber.

Most of these Guardians wield versions of the Power Beam, Battlehammer and Magmaul, but one white-lensed Guardian is seen wielding the Judicator; this is the only time a Guardian is seen wielding the Judicator, raising the possibility that this one may be a prototype. Samus is rendered unable to leave until she has cleared the room of enemies. In the orange containment room, there are several Alimbic Lore entries about Gorea and the Oubliette.

The Watching theme begins playing in this room.

Universal Ammunition Expansion
In the marked passage next to the Guardians in stasis on the upper floor. It is on the platform behind the large cylinder spewing out blue coolant.
Cartograph Artifact
Underneath the Alimbic Turret v1.4 is a computer. Scanning it activates another computer near the entrance for a short period of time. Scanning that one before time runs out temporarily allows Samus to collect the Shield Key. It is near the UA Expansion. If she collects it before time runs out, she can collect the Cartograph Artifact on the first floor.
Attameter Artifact
Defeat all Guardians that awaken upon collecting the Cartograph Artifact to make the Shield Key appear. It is behind the Ice Voldrum. It will allow Samus to collect the artifact on the first floor. The artifact will also unseal all doors.

Oubliette 02
"EIGHT OCTOLITHS ARE REQUIRED TO POWER THE ALIMBIC CANNON. EACH OCTOLITH CONTAINS UNIQUE COORDINATES, FREQUENCIES, AND CODES NECESSARY TO OPERATE THE CANNON."

Oubliette 03
"THE ALIMBIC CANNON CREATES A FISSURE BETWEEN THIS DIMENSION AND THE INFINITY VOID THAT HOUSES GOREA'S PRISON, KNOWN AS THE OUBLIETTE."

Oubliette 04
"THE OUBLIETTE CANNOT BE FOUND IN THIS GALAXY. IT IS HIDDEN IN ANOTHER DIMENSION. IF YOU SEEK THE SEAL SPHERE, YOU MUST FIRST SEEK THE KEYS."

Oubliette 05
"WE HAVE SENT THE OUBLIETTE BEYOND THIS DIMENSION TO ENSURE THAT THE GALAXY WILL NEVER AGAIN SUFFER THE HORROR THAT IS GOREA."

Oubliette 06
"GOREA IS ALONE IN THE VOID. FOR THE SAKE OF ALL LIFE, IT MUST REMAIN SO."

Oubliette 07
"THE INFINITY VOID IS A VAST PARALLEL DIMENSION OF FORMLESS ANTIMATTER."

Seal Sphere 03
"THE ALIMBIC ORDER DIRECTED SURVIVING CITIZENS TO TRANSFER THEIR ESSENCE INTO THE SEAL SPHERE. OUR COMBINED PSYCHIC ENERGY IS THE ENGINE THAT POWERS THE SPHERE."

Seal Sphere 04
"THE SEAL SPHERE IS SECURE WITHIN THE OUBLIETTE, FROM WHICH THERE IS NO ESCAPE."

The Stasis Bunker is also available as a stage in the multiplayer mode. It is essentially the same as in single-player, although the Guardians, doors and some scannable objects are absent. There are two shield-type barriers found on the base floor, and a Jump Pad in the middle. On the top floor there is a tank containing some kind of substance. The arena has two levels, and it is medium-sized. The Imperialist, Battlehammer, Volt Driver, Universal Ammunition, Missile Ammo and Affinity Weapon pickups are found in the map.

Stasis Bunker is not a default stage; it is unlocked by playing forty local games or one Wi-Fi game. 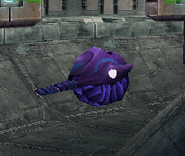 The upper floor of the room, with Guardians in stasis.
Community content is available under CC-BY-SA unless otherwise noted.
Advertisement