The Stiletto-Class Fighter is the basic air and space fighter of the Federation Fleet. The newest addition to the Fleet’s ranks, the Stiletto fighters were already in mass-production by the time of the Space Pirate assault on Norion, with a large number of Stiletto Fighters guarding the G.F.S. Olympus during Samus Aran’s initial visit to the Federation flagship. When not in flight, they are often stored within Olympus-class battleships, and transported via a system of conveyor belts to their respective docking bays when needed.

The Olympus' sister ship, the G.F.S. Valhalla, was also accompanied by a number of Stiletto Fighters; however, they were not enough to repel the Space Pirate raid that ended in the massacre of the Valhalla's entire crew, and several destroyed Stiletto Fighters could be seen among the wreckage when Samus investigated the desolate battleship.

Many Stiletto-Class Fighters were deployed at Norion against a surprise Space Pirate attack. The only other known instance that the Stiletto-Class Fighters were deployed in large numbers was during the Horus Rebellion, which was also implied to have resulted in multiple casualties on the Federation's end. A month after the attack on Norion, Stilettos saw action again during the initial Federation invasion of the Pirate Homeworld and their assault on Phaaze shortly thereafter.

The Stiletto-Class Fighter is the smallest known vessel in the Federation fleet. Its long, narrow wings extend forward past the rounded cockpit, with guns mounted on their tips and twin engines located at their base. The main body features large, vent-like structures on either side of the cockpit, and a long, narrow fin on the top of its stern, while a smaller fin is located on the underside of the stern. The cockpit houses two seats and the window is semi-transparent while the fighter is docked. Some aspects of the Stiletto bear slight resemblance to Samus's Starship in Metroid Fusion, possibly because that ship was also built with Federation technology.

"Stiletto-Class Fighter. The newest of GF fighters that is used throughout the fleet."

GFDF FT-015
As the newest GF fighter, the Stiletto is used in the entire fleet, and replaces the outdated Cestus-class predecessor. Compared with the Cestus, Stilettos have twice the cargo capacity and armor strength, made possible by a revolutionary new propulsion system. Only the Fang-Class, a superior fighter recently developed by the Space Pirates, can compete with the Stiletto. 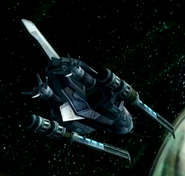 A rear-view of a Stiletto near planet Norion

Samus's Gunship alongside a Stiletto-Class Fighter.

During the battle above Phaaze 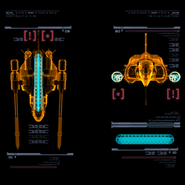