Throughout the course of each game, Samus acquires one or more upgrades to her Power Suit. Each upgrade offers some new protection against specific environmental hazards as well as a reduction in damage taken. The degree of reduction varies significantly between each upgrade and game.

The Varia Suit upgrade, her most recognizable, lets Samus survive extreme temperatures, as well as reduce the damage she takes from enemy attacks. The upgrade adds orange outer armor, a larger, red chestplate, and bulky shoulder pads, giving the suit its most recognizable look (the Varia suit is used in almost every official and unofficial representation of Samus power armor). The shoulder pads were added in Metroid II: Return of Samus to differentiate from the power suit on the Game Boy's monochromatic screen. Before that, it was colored pink in Metroid.

The Gravity Suit colors the yellow parts of Samus' armor purple (and green parts blue in Metroid Prime only) and lets her move unhindered while underwater, with increased visibility underwater in Prime. In all of its 2-D appearances it also protects Samus from lava.

The Zero Suit is the suit that Samus wears underneath her Power Suit, and is used to initiate the Power Suit in Metroid: Other M. Unlike most of her other suits, it is not made of armor and is merely a blue-colored jumpsuit made of an unknown type of polymer. Though Samus is quicker and more agile when in her Zero Suit, she is also weaker and is equipped with the Paralyzer, a mere shocking pistol only capable of stunning her enemies for about a second, long enough for her to run away.

The Zero Suit has only been used twice in gameplay. The first time is after Mother Brain's defeat in Metroid: Zero Mission, when Samus' Power Suit is destroyed and she is forced to run through Chozodia in search of the fully powered suit. The second time is in Other M when Samus is forced to escape the BOTTLE SHIP before its imminent destruction after she loses her composure. Otherwise, it has only been the outfit that she wears in recent Metroid endings.

In Metroid Prime, Samus' final suit upgrade is the Phazon Suit, which is obtained in a unique manner: it was created by viral contamination of the Power Suit, coloring Samus' Varia Suit black, crimson and silver and making her resistant to Phazon radiation. It also granted her with the Phazon Beam, that she used in her final battle against the Metroid Prime core essence. It was later stolen from her as the creature was dying, and used to create a shell for its new form: Dark Samus.

Metroid Prime 2: Echoes featured the most radical departures from the traditional suit design since Metroid Fusion. The first upgrade, the Dark Suit, radically changed the Varia Suit's shape and its color scheme to brown and silver with small red dots around the exterior. The Light Suit once again changes the suit's design to one slightly reminiscent of Dark Samus in Metroid Prime 3: Corruption with a silver/white color scheme. Unlike other games, these upgrades do not increase damage resistance.

Metroid Prime 3: Corruption featured two suit upgrades. The first upgrade, the PED Suit, is a modification of Samus' Varia Suit, with a Phazon Enhancement Device built in to safely harness Samus' Phazon corruption. It merely reduces the shoulder pads in size, coloring them silver, and also coloring the torso and insides of the legs silver. Changes to a dark blue color scheme over time as Samus' corruption grows. The second upgrade is the Hazard Shield, which adds larger, purple shoulder pads. Like in Echoes, these upgrades don't increase damage resistance.

Metroid: Other M featured the classic Power Suit with Varia and Gravity Features. The Gravity Feature maintains the color scheme of the Varia Suit and emits a purple glow whenever it activates, which is whenever Samus is in water or a room with altered gravity.

Several cutscenes also featured a new suit, the Military Dress. It has no properties and is never playable, being the only suit in the entire series with these traits. The Military Dress consists of a long green army shirt that is partly unbuttoned, showing a red shirt underneath. Samus wears grey pants with what appears to be a holster similar to that of her Paralyzer and kneeguards, with black boots. She also has fingerless gloves.

In Metroid Fusion, Samus begins with her traditional Varia Suit, but it is lost after she is infected by an X Parasite, causing Federation scientists to have to surgically remove parts of her Varia Suit. The surgery and a vaccine made from DNA of the baby create the Fusion Suit, giving Samus' armor Metroid-like characteristics. Samus' traditional Varia Suit is worn by the SA-X throughout the mission.

Samus acquires Varia Suit and Gravity Suit upgrades during her mission, but they do not increase the suit's proportions. Instead, they change the color scheme from blue over yellow to light green over magenta (Varia Suit) and to purple over green (Gravity Suit). During Samus' final battle with an Omega Metroid, she absorbs the Core-X of the SA-X, restoring her Ice Beam and original genetic condition, and granting her a new suit, the "Unnamed Suit", which changes her suit's color scheme to orange over yellow (resembling her traditional Varia Suit). Prime features the Fusion Suit as an unlockable cosmetic recolor, with the Fusion Suit being used for the Power Suit and the Unnamed Suit being used for the Phazon Suit.

In the best endings of Metroid, Metroid II: Return of Samus, Super Metroid and Metroid Fusion, Samus would strip down to a bikini swimsuit, collectively known as the Justin Bailey. Its appearance changed in every game.

In Metroid, there were two bailies. The first bailey was a pink one piece swimsuit with long sleeves and matching boots, and was a playable suit if the player pressed start after the credits, with Samus' hair changing color from brown to green to indicate whether she was wearing the Power Suit or the Varia Suit. The second bailey was a non-playable two piece bikini, with no sleeves, but it still had boots.

In Metroid II: Return of Samus, the bailey was no longer playable. In this occurrence, Samus wore a tank top and underwear (which was colored red if the game was played using a Super Game Boy, Game Boy Player or Game Boy Advance), and was barefoot. This was the first game to feature the now classic movie depicting Samus pulling her hair out of a ponytail and posing with her hand on one hip.

In Super Metroid, Samus wore a black sports bra, with matching underwear, boots and wristbands. Super Metroid sparked the first occurrence where the bailey would be featured in the Game Over sequence.

Metroid Fusion had a similar outfit, but it was now blue and instead of underwear, Samus wore a pair of shorts.

Despite the introduction of the Zero Suit, Metroid: Zero Mission featured a bailey as well, in the vein of the depictions in Super Metroid and Metroid Fusion, though now colored orange. Bailies are completely absent from the Metroid Prime series and Metroid: Other M. 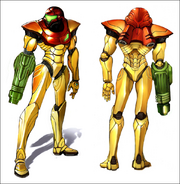 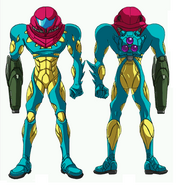 The Fusion variant of the Gravity Suit in Metroid Prime 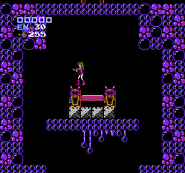 The Justin Bailey in Metroid.

The Zero Suit as it appears in Metroid: Other M.

The Military Dress in Metroid: Other M.

The "Ending Outfit" from Fusion as seen in Super Smash Bros. for Nintendo 3DS and Wii U.
Add a photo to this gallery
Retrieved from "https://metroid.fandom.com/wiki/Suits?oldid=279951"
Community content is available under CC-BY-SA unless otherwise noted.