Unleashes a ball of light that incinerates weaker enemies upon impact.

The Sunburst is a Charge Combo for the Light Beam, featured only in Metroid Prime 2: Echoes.

The Sunburst is the most powerful attack that can be generated by the Light Beam. Using a fully charged shot, 5 Missiles and 30 Light Beam Ammo, the Sunburst is formed, slowly travels toward its target, and then detonates on contact with an enemy or surface. Any nearby enemies will be set alight if not hit directly, which will usually burn them to cinders after several seconds. The Sunburst is the most lethal and feared attack among the Ing and their Darklings.

The Sunburst is an optional Charge Combo sealed within a complicated locking system within the Grand Windchamber in the Temple Grounds. Samus must be in possession of the Boost Ball, Power Bombs, the Seeker Launcher and Grapple Beam in order to obtain it. 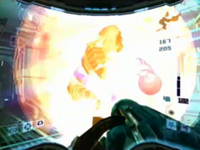 The Sunburst is generated from the Arm Cannon which unleashes a fairly large sphere of white hot light. The light sparkles and warps as it moves, casting rays of light over the surrounding area; if there are nearby enemies, the rays will lock onto them and burn them brightly. The sphere travels slowly, and explodes in a blast of pure light energy like a bomb when it hits an enemy or solid surface. Any enemies within range of the detonation are immediately set alight or incinerated, making the name Sunburst well-earned.

However, the Sunburst's slow travel speed makes it easily dodged by mobile enemies, and does not suck enemies into its blast area like the Darkburst does. As such, the Sunburst is most effective against groups of large or slowly-moving enemies, or in close-quarters combat where it is less likely to be dodged. Like the Darkburst, it is possible to aim the Sunburst at the ground or an adjacent wall to prevent the attack from passing by without effect if it were to miss. Some enemies, like the Pirate Commandos are resilient enough to withstand the damage from a direct hit, but even they are usually killed shortly afterward by the flames that envelop them.

The Sunburst is placed atop the large structure in the center of the Windchamber. Samus must manipulate Spinners placed in Dark Aether to release the locking mechanism in place around the structure. After lining up four semi-circular rings on the system so that they glow blue, Samus can use her Seeker Launcher to fire simultaneously at four orbs placed on each semi-ring. This will release two arms from the device. After repeating this action on the opposite side, all four arms will have been raised. Samus must travel back to Aether. The arms have extended here as well, allowing her to swing around the Grapple Points on each to reach a Kinetic Orb Cannon that will launch her to the Sunburst.

There is another method of acquisition involving Sequence Breaking. A Spring Bomb Jump will get Samus up to a rock, and she can then Screw Attack over to her prize: the Sunburst. [1]

The Sunburst is the Light Charge Combo. It can damage targets in a wide area as it flies to its target.

Each Sunburst shot requires 5 Missiles and 30 Light Ammo.
Sunburst is a slow-moving blast. It is limited against speedy and agile targets.
The Sunburst can set enemy targets and objects on fire.

The Sunburst in its Item form.

Samus tests the Sunburst upon aquisition.

The Sunburst detonates upon hitting a Pirate Commando.

Samus unleashes the Sunburst upon an Ingsmasher.
Add a photo to this gallery
Retrieved from "https://metroid.fandom.com/wiki/Sunburst?oldid=269058"
Community content is available under CC-BY-SA unless otherwise noted.