Sunchamber Access is a room in the Chozo Ruins. It appears in Metroid Prime.

This room is a chamber in the shape of a rectangular prism with what appear to be stable Sandstone walls; some darker grey rock leads up to the level of the higher Door and covers part of one wall. Venom Weed and Reaper Vines are found throughout its length. There are some metal crates on the upper ledge.

A small, pink holobanner depicts Flaahgra beside the door that leads to the Sunchamber; unlike other holobanners it cannot be scanned. This is likely foreshadowing the battle that Samus will have with Flaahgra shortly.

After entering the Sunchamber, the door leading to it gets blocked by several vines. The vines will only disappear after defeating the Chozo Ghosts and collecting the Artifact of Wild in the Sunchamber.

Vines (after defeating Flaahgra)
"Scan indicates this network of vines is invulnerable to weapons fire." 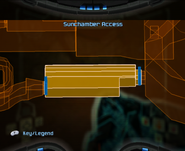 Model of the room seen from the Map.

The room as seen from the higher door

Samus faces a Reaper Vine in the room. 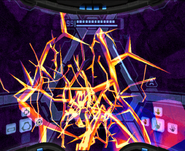