The Super Smash Bros. Ultimate panoramic artwork is a piece of hand drawn key art for Super Smash Bros. Ultimate. Illustrated by longtime Nintendo artist Yusuke Nakano, it depicts every single fighter in the series history, all of whom are playable in Ultimate, alongside a dozen newcomers. It also features Mr. Saturn, a non-playable item. The artwork was first unveiled after the full reveal of Ultimate at E3 2018. On the game's official website, it serves as the scrolling background of the main page. Clicking anywhere on it will take the viewer to the fighters page.

Fighters who appear on the game's boxart retain their poses, including Mario, Link, Samus, and the Inkling. The artwork appears partially divided in half by Pichu's Thunder attack; Samus is placed just to the left of this, below Diddy Kong and above Zelda and Cloud. Zero Suit Samus is positioned further to the right, enveloped by Dark Samus, Bowser Jr., Ganondorf, Pac-Man, Roy, Rosalina & Luma, Mega Man, Ness, and Marth. Ridley is on the very right side of the artwork, next to Meta Knight, Captain Falcon, Duck Hunt, Chrom and Robin.

As new fighters have been confirmed in three subsequent Nintendo Directs, they are shown appearing in the artwork. While Ken and Incineroar were added after their joint reveal during the November 1, 2018 Direct, Piranha Plant and Joker, the first two confirmed downloadable characters were not added until their release. Hero and Banjo & Kazooie, the third and fourth DLC characters, were added to the artwork following their respective reveals. Two more unknown characters remain to be added.

According to Nakano, the idea for a mural with all of the fighters in Ultimate came from Masahiro Sakurai.

The animated "More Fighters, More Battles, More Fun" commercial is directly based on this artwork. It begins with a person viewing the artwork on the side of a bridge, before zooming in and showing the fighters coming to life. Samus, Ridley and Zero Suit Samus (but not Dark Samus) are seen battling in it. Samus is shown running with Marth and Pikachu, before all three dodge a Shadow Ball from Mewtwo. Ridley and Pit are shown struggling over the latter's bow. Near the end of the ad, Zero Suit Samus and Shulk are seen, about to attack each other, before they, Villager and Sonic leap out of the way of Bowser's fire breath.

The original artwork at E3. 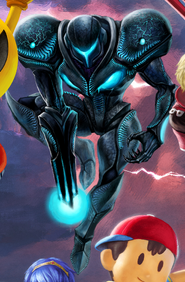 Dark Samus is added to the artwork at the end of the August 8 Direct.

Updated after the August 8 Direct to include Dark Samus, Simon, Richter, King K. Rool and Chrom.

Updated after the September 13 Nintendo Direct to include Isabelle.

Add a photo to this gallery
Retrieved from "https://metroid.fandom.com/wiki/Super_Smash_Bros._Ultimate_panoramic_artwork?oldid=272231"
Community content is available under CC-BY-SA unless otherwise noted.