Wikitroid
Register
Don't have an account?
Sign In
Advertisement
in: Pages in the real-life POV, Games, Super Smash Bros.,
and 2 more
English

Similar to previous entries in the series, Super Smash Bros. for Nintendo 3DS and Wii U are competitive fighting games which feature a vast array of Nintendo characters to choose from.

Players battle in matches of up to four players (8 in the Wii U version), and compete to knock their opponents off the screen. Players can select a variety of stages on which to battle, which are based on Nintendo game environments old and new.

Players may use items to assist them in battle, which draw from many Nintendo games, and use Assist Trophies which can be used to summon other, non-playable characters to aid the player in battle.

A variety of battle modes are available to choose from, including Classic, All-Star, Smash Run (3DS only), Training and many other mini games. Players can also collect Trophies of Nintendo characters from a huge array of games, which provide the player with information on the character and what game they are from.

Super Smash Bros. for Nintendo 3DS and Wii U also features an online mode, which can be used to play against friends or anyone in the world. Online matches against strangers are sorted into two categories; 'For Fun' and 'For Glory'.

The former allows players to battle in a standard Smash Battle or Team Battle, with items allowed and stages in their default setting. 'For Glory' mode is targeted towards more competitive play, and features an additional '1-on-1' mode. The player's KO and fall count will be recorded in this mode.

Samus and Zero Suit Samus, along with several other veteran fighters return as playable characters. The Geothermal Power Plant is featured in the Wii U game as a stage known as Pyrosphere. Norfair is also returning. Ridley appears on Pyrosphere as an AI character that can be recruited by attacking him enough, and he can be killed. Joulions, FG II-Grahams and Zeros are also featured as enemies on the stage.

In addition to the Metroid returning from Brawl, Mother Brain and Dark Samus feature in this game as Assist Trophies. Metroids, Reos, Kihunters and Geemers appear as enemies in Smash Run. Kraid was said to appear as a boss character in that game mode, but he is not present in the final game[1]. The Screw Attack item also returns and still works as a wearable badge like it did in Brawl. Metroid and Super Metroid are featured as Masterpieces in the Wii U version.

The games is the first to be compatible with the new amiibo technology, which is similar to Skylanders and Disney Infinity. These figures, which include Samus and Zero Suit Samus, are placed on the Wii U GamePad or New Nintendo 3DS system to interact with the figure. Performance Designed Products (PDP) have created a line of Wired Fight Pads, a type of Classic Controller with designs based on Nintendo characters, including Samus, for the Wii U game.

Samus and Zero Suit Samus have become separate characters, with their Final Smashes no longer forcing a switch between the two. This also means the taunt trick to shed the Power Suit mid-match no longer works.

The change also applies to Zelda/Sheik who can no longer transform mid-match, and the Pokemon Trainer being removed altogether in favor of only Charizard.

The reason for the change was because the developers "want people to focus on single characters more deeply", however its been stated that the 3DS' hardware was proving to be a challenge for "multiple character combatants".[2]

Introduced into this game is a customization feature which allows players to fundamentally alter functions of character moves. All fighters including both Samus characters now have three variants of each of their four special moves (twelve in total). Except for Palutena and the Mii Fighters, this entails unlockable versions of each attack with benefits or drawbacks (for example, Samus changing her Charge Shot to a slow-moving or close-range attack).

Samus and Zero Suit Samus' appearances are now mainly, but not completely based off of Metroid: Other M, unlike the earlier games which based their appearances on their depictions in Super Metroid and Metroid: Zero Mission.

See Event Match for a list of Metroid-centric Event Matches in the game.

Samus' appearance has numerous black vents on the armor, an opaque visor and taller height. She has a new running animation which closely resembles her run cycle in Other M, and a different pose when firing Super Missiles, which have now been reduced in size along with her Bombs. Samus also received modifications to her moveset, with a new neutral air double kick that hits on both sides, an explosion effect added to her forward smash, missiles can now be cut in half by sword wielding characters, and an overall increase in attack power. Sakurai also commented in one of his "Pic of the day" posts on Miiverse that "the speed and power of Samus's Charge Shot has been drastically improved". [3]

Zero Suit Samus wears the design of the Zero Suit from Metroid: Other M, but retains her hairstyle from Metroid: Zero Mission (although with the Other M bangs), blue eyes and taller and athletic build. Her proportions also appear more exaggerated than in Other M. Zero Suit Samus' moveset and strength have been reworked around her new Jet Boots, which augment her kicks and jumps.

Her new up special move, Boost Kick, replaces the Plasma Wire, and her forward smash is also changed to a double kick. She retains her Paralyzer, Plasma Whip and Flip Jump special moves. She can now use her long-range grab as an air attack and tether recovery like her armored self. Replacing Power Suit Samus is Gunship, in which, as the name implies, Samus jumps into her Gunship, flies away and then can shoot at opponents for a limited period of time. Her introduction animation has also changed and now has her jumping out of her Gunship and landing on the battlefield.

Zero Suit Samus' blue, red, black and green costumes alts return, but not her purple outfit. She now has a white costume (matching her Power Suit's white palette and resembling an outfit from the Fusion endings) and her blue and orange ending outfits from Metroid Fusion and Zero Mission as costumes.

As far as voice acting goes, Alésia Glidewell's voice clips from Brawl used for Zero Suit Samus are recycled for this game, rather than Jessica Martin, who voiced Samus in the most recent Metroid: Other M recording new sound effects.

Suited Samus' Nintendo 3DS All-Star image is a reference to the final battle between her and Dark Samus in Metroid Prime 2: Echoes.

Zero Suit Samus' Wii U All-Star image is a reference to Bayonetta, who would later become playable in Smash herself.

amiibo are Nintendo's toys to life figurines that can be used on a variety of compatible games, but the Super Smash Bros. series of amiibo was the first. The Metroid series received two amiibo figures, which are Samus and Zero Suit Samus: 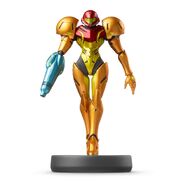 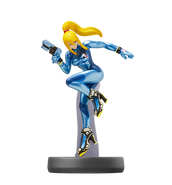 The Samus Aran amiibo released alongside Metroid: Samus Returns is compatible with Super Smash Bros. for Nintendo 3DS and Wii U, functioning the same as the Smash series Samus.

Names in Other Languages[]

Samus' artwork for the game

The first wave of amiibo figures.

"Back in Metroid: Zero Mission.
She crawled." (Official Facebook page) 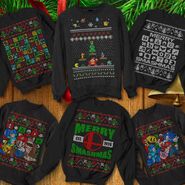 Samus as a "Gold Fighter". On the Golden Plains stage (3DS only), collecting 100 of the Coins will color the fighter gold and increase their defense and attack power.

Sept. 3, 2014: "Pic of the day. Until now, you were only able to choose from four, or sometimes five or six colors for each character. This time, though, all characters have eight colors to choose from! The first four color schemes for Samus are based off her Varia Suit, Fusion Suit, Gravity Suit from Super Metroid, and the Dark Suit."

"…And here she is in the color schemes of the Gravity Suit from Metroid Prime, Green Samus (a regular in the Smash series), the Light Suit, and Dark Samus. A total of eight colors."

A new costume for Samus, resembling the Light Suit.

Samus in the introduction cutscene.

Both Samus characters' Boxing Ring titles in the Italian version of the game. 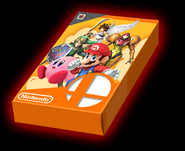