More powerful than the Cyborg Zebesians also encountered on the BOTTLE SHIP, they are all the result of experimentation by the Galactic Federation which attempted to create a special forces unit based on the Space Pirates.

Super Zebesians can fire a red and green charged version of their basic laser attack, out of a large cannon replacing one of their claws. This charged shot has the properties of the Wave Beam, meaning they can permeate some substances like glass. The cannon bears an resemblance to Samus' Chozo-based Arm Cannon. Super Zebesians are also capable of raising their claws up like the Zebesians from Super Metroid and firing a barrage of several shots at once. Additionally, they kick Samus if she gets too close, rather than grabbing her unlike the predecessor.

Samus first encounters them in the Cryosphere, where they trapped her behind three glass barriers, and shot at her with their permeating beams. Adam authorized the Wave Beam so Samus could counter attack. After this a squad of Super Zebesians attack Samus in two waves, three in one and four in another, whilst she is escaping the Cryposphere in the Materials Transfer Lift. After this they replace most of the other Zebesians on the ship. They also attack Samus as she traverses through the Desert Refinery. Some appear when Sector Zero is being disengaged from the BOTTLE SHIP, and they are drawn into space due to their lack of Anti-gravity equipment. Several of them attack her when she is nearing the control bridge. In the Bioweapon Research Center, there is a room where Super Zebesians ambush Samus after picking up a Missile Expansion. Super Zebesians also appear and attack Zero Suit Samus while she escapes the exploding BOTTLE SHIP.

"These Elite Cyborg Zebesians have been strengthened. Their attacks are the same, but are also capable of firing a diffusion beam." 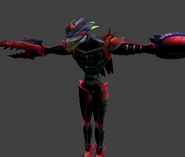 Samus executes a Lethal Strike on a Super Zebesian in the Materials Transfer Lift.

Retrieved from "https://metroid.fandom.com/wiki/Super_Zebesian?oldid=259492"
Community content is available under CC-BY-SA unless otherwise noted.