Swarmbots are small, airborne Elysian drones. As the name implies, Swarmbots travel in moderate-sized swarms throughout the Chozo SkyTown facility. The only functioning units ever encountered appear to have either gone rogue or suffered from Phazon corruption, as they will attack any organic being on sight. Little is known about their original function, although their lack of tools or other equipment and relatively potent weapons systems indicate that they may have been created for security or defense purposes. Their behavior and appearance resemble that of the Phazon Nightbarbs of Bryyo.

The diffuse nature of a Swarmbot cloud provides excellent protection against attack, as the fast-moving individual robots are capable of avoiding most any weapons system. When Samus Aran approaches, the swarm will collapse to form a small ring and begin charging a series of energy blasts: during this period, they are vulnerable to all of the Hunter's weaponry. However, if the swarm is disrupted early in the charging process, damaged Swarmbots will survive and attempt to ram Samus: these robots are slow-moving enough to be targetted and destroyed individually, although their small size necessitates a fair amount of aim.

The drone Helios also commands a large number of Phazon-energized Swarmbots in order to defend the Elysia Seed: these machines are vulnerable to attack, but the vast quantities produced by Helios make it useless to destroy them individually. They form complex patterns to assist in Helios's attacks, such as "legs", spherical shields, etc. Upon the master drone's destruction, the Swarmbots revert to their conventional energy level and disperse. The shape-shifting bounty hunter Gandrayda occasionally transforms into Swarmbot-G, a circling group of Swarmbots during her own encounter with Samus.

Besides the Elysian Leviathan Core, Swarmbots are found in Skybridge Athene after the acquisition of the Ship Grapple, Gearworks and the Spire Dock before Samus summons the Escape Pod. 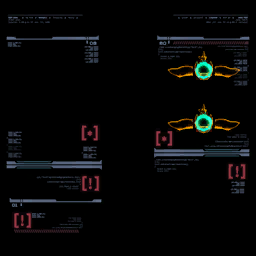 Swarmbots tend to travel in groups. They can evade many inbound attacks, and can perform aerial maneuvers that make them nearly impossible to damage. They can generate pulses of energy to damage or disrupt enemy targets. As a desperate measure, they will perform suicide runs on an enemy.