Sworn enemy of Samus Aran and the Galactic Federation.

Very little is known about this character or why Sylux hates the Galactic Federation and Samus Aran. Sylux views fellow Bounty Hunter, Samus Aran, as an enemy by association for working with the Federation.

Looking at the overall humanoid shape, and the humanoid hand holding the Shock Coil (Sylux's weapon of choice), it is possible, and sometimes assumed, that Sylux could be human. This theory is also backed partially by the use of stolen Federation gear and armor, which seem to be human in shape, however, Sylux's species in the cinematic intro of Metroid Prime: Hunters is labeled as "unknown." Sylux is seen fighting Federation soldiers in a location called "Cylosis". Sylux in the Federation Force ending has humanoid-looking hands as well.

Sylux's ship is the Delano 7, a blue X-shaped ship with aerofoils similar to the Lockjaw form. Along with Samus's Gunship, Rundas' Phrygisian-class gunship, and Ghor's armorsuit/gunship combination, the Delano 7 is one of the few hunter ships to appear in the games themselves, although Weavel's spaceship makes a small appearance in a docking bay during the cutscene for landing on the Oubliette, and Kanden's ship is detected by Samus' near the Celestial Archives.

Samus first encounters Sylux in the Weapons Complex on the Vesper Defense Outpost. They do battle, with Sylux using the Delano 7 to attack Samus during the battle. After this, Samus randomly encounters him while searching for the remaining Octoliths in the Alimbic Cluster.

Once Samus opens the way to the Oubliette, Sylux quickly enters the interdimensional prison, believing the Ultimate Power sought by him, Samus and five other Bounty Hunters to be there. Sylux reaches the center of the Oubliette and discovers the Seal Sphere. He, along with the other five Hunters begin eagerly firing at it, believing it contains the Ultimate Power. Instead, to their horror, Gorea emerges. It attacks the Hunters, assimilating their weapons and leaving them to evacuate the Oubliette in shame, while Samus stays behind to destroy the creature. Sylux is last seen escaping the Oubliette, shortly before its destruction.

In the Special Ending of Metroid Prime 3: Corruption, Samus departs for space in her Gunship. She is unknowingly followed by a mysterious spacecraft, piloted by Sylux.

During M17: Infestation, the Federation Force is ordered to destroy a Metroid-breeding facility on Talvania. General Alex Miles asks each Marine in the Force to retrieve a Metroid Egg for study.

If this objective is complete, a cutscene after the credits shows Sylux breaking into a Federated Force research station. He uses a device on his arm to hack the stasis tube containing a Metroid Egg, causing it to hatch. The camera then zooms out to show the individual has a shoulder spike resembling that of Sylux. Logan Foster, a contract environment artist for the game, confirmed it was Sylux in the ending.

For years after the release of Corruption, it was speculated that the pilot of the ship was Sylux due to the ship's resemblance to the Delano 7. At E3 2015, the producer of the Metroid Prime series, Kensuke Tanabe, confirmed that the pilot was in fact Sylux. He referred to Sylux using male pronouns and expressed interest in developing a game about Samus and Sylux.[1][2] This potential game would be released after Metroid Prime: Federation Force, which was meant to flesh out the role of the Galactic Federation in the series. At E3 2017, Metroid Prime 4 was announced, but whether Sylux will in fact have a role in it is currently unknown.

An interview with Richard Vorodi, the story designer of Hunters, was published on August 6, 2020. In it, he said that a "great backstory" exists for Sylux, with "a lot of threaded storytelling in there, that made using the character in other games a good fit." He also indicated that he knew Sylux's true identity, but did not elaborate.[3]

Like all other Hunters in the game, Sylux is capable of defeating Samus and taking one of her Octoliths. In order to complete the game, Samus needs all of the Octoliths, and thus must fight her thief again in order to gain it back.

Sylux's Affinity Weapon is the Shock Coil. The Shock Coil was a prototype weapon under development by the Galactic Federation. It is an illegal combat technology: It fires a continuous beam of concentrated neutrinos at its target. It was eventually stolen by Sylux, along with a prototype suit, Lockjaw, and the Delano 7. The Delano 7 is encountered twice in the game, and it is the only Hunter ship other than Samus' seen (in detail) in the game. Interestingly, despite hating the Galactic Federation, Sylux currently only uses equipment that was designed and made by them.

Sylux has an alternate form known as the Lockjaw. In this form, Sylux becomes a ball of green energy the size of Samus's Morph Ball form, surrounded by two entwined, metal bars that look like a deformed version of the Delano 7 with energy threads connecting them together. Sylux can deal a large amount of damage in this form and is quite agile. While in this form, Sylux can place three Electric Bombs and connect two of them, which creates a tripwire, unless there are obstructions or they are set too far apart. Once the third is placed, they all blow up regardless of how far away they are.

Sylux has also appeared as a trophy in Super Smash Bros. Brawl. It is the only one of the hunters' trophies that is referred to with gender-neutral pronouns.

"A skilled marksman and bounty hunter experienced in espionage skills such as scouting and tracking. While much of its background remains a mystery, it is clear that it hates Samus and the Federation. Sylux uses the Shock Coil, an experimental Federation-made weapon that continually drains energy from enemies and refills its own."

"Sylux's background is unknown, but the hunter's motives are clear - to crush the Galactic Federation. Using technology suspiciously similar to a stolen Federation prototype, Sylux can deploy blades that travel along beams of energy while the hunter is in ball form." [4]

This hunter's power suit appears to be based on a federation prototype and possesses extraordinary offensive and defensive capabilities. SYLUX's weapon is the SHOCK COIL, a banned technology that fires charged blasts of high-density NEUTRINOS.

"Little is known about the mysterious bounty hunter known as Sylux, other than the fact that Sylux harbors an intense hatred for the galactic federation and the bounty hunter who has helped the Federation time and time again... Samus Aran."

"In arenas with veiled doorways or narrow main passages, Sylux's Alt-Form Bombs are great traps. In Capture mode, Sylux can pursue hunters who have stolen his Octolith and sap their energy."

Like all other Bounty Hunters, Sylux has his own music theme heard when Samus battles him in Adventure Mode. 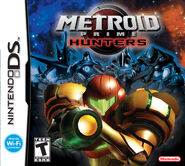