Wikitroid
Register
Don't have an account?
Sign In
Advertisement
in: Articles with non-canonical information, Metroids, Tallon IV,
and 9 more
English

Stage 2: Juvenile
Tallon Metroids are a strain of Metroids that originated from a batch of specimens multiplied by Space Pirates on planet Tallon IV. These flying, life energy-draining predators are encountered in both Metroid Prime and Metroid Prime 2: Echoes. They are not as resilient as most breeds of Metroid larvae seen elsewhere in the series, but they retain other traits of the species that make them highly dangerous.

Tallon Metroids have massive potential to mutate further, leading to the creation of additional aberrations present throughout the Metroid Prime series.

For the most part, Tallon Metroids are nearly identical to the larvae from Zebes, Talvania, SR388, the BOTTLE SHIP and BSL Station: they have four-lobed red nuclei enclosed by a translucent membrane, with a mass of flesh underneath featuring two pairs of curved mandibles. They also behave similarly when hunting, such as using their larger pair of fangs for gripping onto their prey's head and the smaller pair for sapping energy. They are vulnerable to cold, and will be instantly frozen by weapons possessing low temperature attributes. If they latch onto Samus, the only way to dislodge them is by dropping a bomb in close proximity while in Morph Ball form.

The dissimilarities between the breeds begin in the strength of their defenses: while Metroid larvae commonly require being frozen before wounding them with concussive weapons, Tallon Metroids can readily be damaged by any weapon in Samus' arsenal (including the Morph Ball Bombs) without freezing them first, though an extensive amount of firepower is required to simply kill a single one. When frozen, a Tallon Metroid can be shattered by one Missile instead of the usual five. Similarly, a Metroid larva from Zebes can withstand three Power Bombs, but the Tallon-grown breed is obliterated within the first detonation; meanwhile, the original SR388 strain is completely invulnerable to them.

Other differences can be seen in the Tallon strain's physiology, such as its more oval-shaped membrane and the lack of an oral cavity on its underside which, in other breeds of Metroid, seemingly allows them to pull their prey's upper bodies into their insides, thus strengthening their hold. Without a mouth, the Tallon Metroid relies only on its fangs to attach itself onto a target, though its grip remains just as powerful as the other larvae's. Tallon Metroids initially start out small, approximately the size of Samus's Morph Ball form. However, Tallon Metroids are capable of expanding their mass: after absorbing energy from prey or attacks, they will briefly shrink before expanding greatly in size, reaching more or less the size of other larvae seen elsewhere in the series. During this process, the Metroid's body will be enveloped in energy and briefly invulnerable to all weaponry. The Tallon Metroid's fangs will also spasm as the creature shudders erratically. This event has never been seen to occur in other breeds of Metroids.

In Metroid Prime 3: Corruption, scans in Metroid Processing on the Pirate Homeworld states that all disparities between Metroid breeds, such as those mentioned in the previous paragraphs, result from adaptions that occur following exposure to different environments, radiations and stimuli. An example of such an adaptation is the Tallon Metroid acquiring a red membrane when imported to planet Aether. There is a possibility that the presence of Phazon in Tallon IV's environment played a role in the creation of the Tallon strain; giving credence to this is the Tallon Metroid's infant stage being able to quickly mature when in contact with the mutagen.

The life cycle of a Tallon Metroid differs vastly from a Metroid on its native planet of SR388, the latter which goes through the Egg, Infant, larva, Alpha, Gamma, Zeta, and Omega stages, with a Queen being the sole reproductive member. Metroids such as the Tallon strain who inhabit alien environments are unable to metamorphose past the basic larval form unless exposed to extreme forms of radiation. Space Pirates were largely involved in the creation of much of the Tallon Metroid's life cycle seen below.

Infants have a very underdeveloped appearance. Exposure to Phazon will cause the infants to mature rapidly, reaching the next stage in a matter of seconds. Infant Tallon Metroids are the result of experiments performed by Space Pirates on the mature form, thus they cannot be spawned by older Tallon Metroid individuals.

This specific stage is the most frequently encountered form of the species in the Metroid Prime series overall, undoubtedly a result of the Space Pirates' usage of Beta-Rays and/or Phazon which are both capable of multiplying their supply of specimens. Despite being the third stage in the life cycle, Mature Tallon Metroids were the first to exist when Metroid larvae from Zebes and/or SR388 adapted to Tallon IV. There is a probability that Phazon was a contributing factor to the creation of this strain due to the fact that Tallon IV's atmosphere was contaminated to a certain extent by the mutagen.

As the Space Pirates attempted to exploit them as practical bioweapons and energy sources on several planets, it was discovered that Tallon Metroids were highly responsive to Phazon. This lead to the creation of additional mutants such as the Fission Metroid and the Phazon Metroid; the latter could bypass the jellyfish-like form and metamorphose into other aberrations. Though never confirmed, the highly mutated creature known as the Metroid Prime (and its later form, Dark Samus) likely began its life as a Tallon Metroid. Interestingly, Metroid Prime was capable of spawning Tallon Metroids from the pools of pure Phazon it created. However, these freshly spawned Tallon Metroids, as well as Metroid Prime itself, were highly vulnerable to the Phazon Beam, a weaponized form of the very substance these Metroids adapted to.

A Tallon Metroid can attain a unique, older form known as the Hunter Metroid. Hunters no longer latch onto their targets with their fangs and instead use their new tentacles for long-range attacks. It is unknown if the Hunter stage is the result of prolonged exposure to either Phazon, Tallon IV's environment or a combination of both. Despite possessing a red membrane like a Tallon Metroid adapted to Aether, Hunter Metroids were never encountered on the planet.

In Metroid Prime Hunters: First Hunt, Samus practices her skills inside arenas where she battles against different types of Xenomorph holograms, one of which is unmistakably based on the Tallon Metroid breed. They possess the same oval-shaped membrane and can also be destroyed with Samus's standard weaponry.

Tallon Metroids appear as enemies in Metroid Prime Pinball, a pinball adaptation of the original Metroid Prime. They appear on various tables and are the target of the Metroid Mania Mini-Game. Although their official artwork is unmistakably that of the Tallon Metroid strain, their in-game model bears a closer resemblance to generic Metroid larvae.

In Super Smash Bros. Brawl, the Tallon Metroid (simply called "Metroid") is available as a Sticker, using its render from Pinball. It can be applied to any fighter to increase Freezing Attack power in Adventure Mode: The Subspace Emissary. 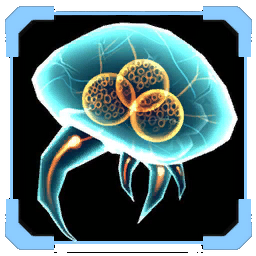 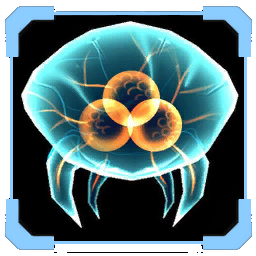 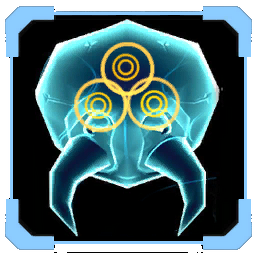 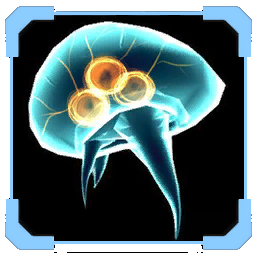 The dominant species of planet SR388, Metroids can suck the life force out of living things. A Metroid will latch onto its prey and drain energy, growing larger as it does. The only way to shake an attached Metroid is to enter Morph Ball mode and lay a Bomb.

Space Pirates harvest and enslave Metroids for use in their operations. The Tallon Metroid will latch onto prey with powerful pincers, then proceed to drain its life energy. This causes the creature to grow in size and mass. The creatures are vulnerable to the chilling effect of dark energy, and can be detached by entering Morph Ball mode and deploying a Bomb. 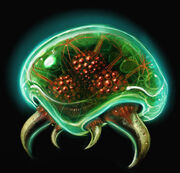 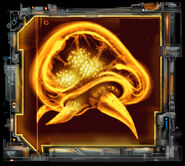 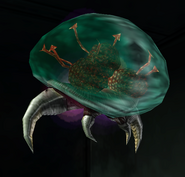 A Tallon Metroid in containment in the Glacier One facility on Tallon IV.

A Tallon Metroid draining energy from a Shadow Pirate in the Research Core. 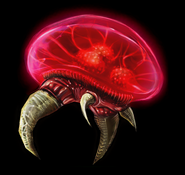 A Tallon Metroid when brought to Aether. 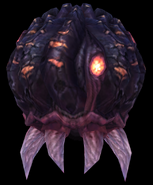