None; invulnerable to all weaponry

Tatori is a tortoise-like creature found in a large room in Maridia.

The Tatori is one of the most heavily armored creatures on Zebes. It has a large shell protecting its body, save for the legs, neck, and tail.

The Tatori can retract its limbs and spin rapidly, allowing it to "jump" high in the air. Samus can safely stand on its back and ride the Tatori to acquire an Energy Tank up higher on a Grapple Point and a Missile Expansion hidden in a wall.

Tatori, Jr. are also found in Maridia, and are the offspring of the Tatori. Normally, the Tatori will not attack Samus, but should she touch one of its offspring, Samus will be attacked by the spinning Tatori ramming into her.

Tatori have not appeared since Super Metroid. It can be assumed that they had gone extinct when Zebes exploded. 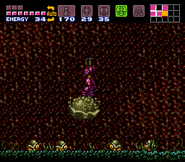 Samus using Tatori as a platform
Community content is available under CC-BY-SA unless otherwise noted.
Advertisement