Access to Elevator to the Great Temple, access to Storage Cavern B, location of a Missile Expansion

The Temple Assembly Site is a room in the Temple Grounds. It appears in Metroid Prime 2: Echoes.

Several Galactic Federation Crates litter the floor of this room, along with stacks of ancient Luminoth statues. The statues form a circle around a clearing supposedly meant for Luminoth meetings. A violet Translator Door, which Samus must get an upgrade for her Translator Module to bypass, blocks the entrance to an elevator. Among the Luminoth ruins are Federation equipment like a crane and other heavy tools. A statue with a violet crystal blocks access to a Portal and must be shot with the Light Beam in order to move it. Dark Aether's duplicate of this room is known as the Plain of Dark Worship.

1 free Splinter, 5 in cocoons
"Morphology: Splinter
Predatory insectoid hunter.
Splinters are aggressive and dangerous in numbers. Their light armor is no match for your weapons, however."

Missile Expansion
Requires Space Jump and Morph Ball. Samus must jump onto one of the statues and onto a ledge along the wall. The Expansion is inside a small tunnel.

Splinter Cocoon
"Morphology: Splinter cocoon
Protective structure for sleeping Splinters.
Destroying this structure will eliminate the Splinter inside, but it will also alert other Splinters nearby."

Translator Door
"Let this gateway forever protect our sacred temple.
May you find enlightenment and peace." 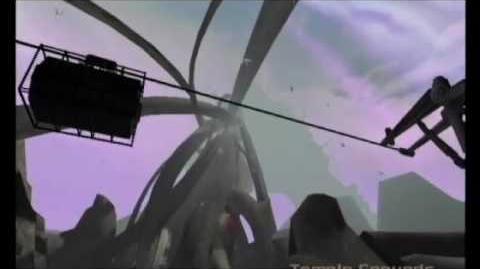 The Site overcast as a result of an interdimensional storm

The free-floating Ing attack Samus as there are no longer any Splinters nearby for them to possess.
Community content is available under CC-BY-SA unless otherwise noted.
Advertisement