Temple Generator is a room in Bryyo Fire on Bryyo. It appears in Metroid Prime 3: Corruption.

This is one of two rooms on Bryyo that contains a Leviathan Shield Generator. Samus visits the room during her mission on Bryyo. When she enters, she sees the shield generator from afar, blocked by a red force field. As Samus prepares to leave, Aurora Unit 242 will send her a transmission, instructing her on what to do next.

After she acquires Ship Missiles, she returns to the room and instructs her Gunship to open fire on the generator, weakening the shield and rewarding Samus with a Gold Credit.

There is also a hologram console at the front of the room, which displays a hologram of the generator. Initially it is offline, but Samus can use a Hand Scanner to activate it.

Downfall
"Look now to the time of battle, tribe against tribe. See fertile land swept clean of all living things by arcane nightmares or the hellish blasts of Science. See the giant stone Mogenars do battle, destroying the land with their titanic blows. And hear the undying scream of a planet wracked by darkest war. The battles waged endlessly, and the resources needed to sustain our war machines were great. Bryyo too had become a casualty of the war; the air was filled with the smoke of battle and the soil soaked with the toxins of pollution. Calamity after calamity visited the folk of Bryyo, until a world once known for wonders became a scarred husk under the stars. Only a small region remained habitable, and to it the survivors went, bringing the war with them."
Hologram console (offline)
"Hologram console offline. Current display: none. Restore power to operate."
Leviathan Shield Generator
"Leviathan Shield Generator. Armor plating made of Maldium. Armor integrity at maximum."
Bryyo Seed
"Leviathan Seed has impacted itself within the planet. Currently protected by an energy shield."
Hologram
"Shield generator status: online. Inaccessible from current location. Unable to reach from the ground."
Destroyed Generator
"Shield generator destroyed. Power production: zero. Chance of repair: zero."
Bryyo Seed (after destruction of generator)
"The energy shield protecting the Leviathan Seed has become unstable, but is still operating."
Hologram
"Shield generator offline."
Hologram console
"Hologram console online. Current display: shield generator schematic." 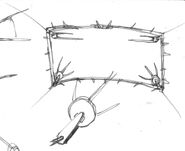