Thardus is an enormous rock monster charged with Phazon energy that inhabited Tallon IV in the Phendrana Drifts. It was originally an experiment by the Space Pirates to use Phazon to create sentient creatures out of inanimate objects, but was found quarantined in a cavern in Metroid Prime. This experiment was titled "Project Titan".

Thardus controls the rocks in its domain and the icy weather that resides over the drifts. Its primary attack is to animate three small rocks and cause them to rush at the enemy; these rocks can be destroyed for ammo and energy. It can also slam its fists into the ground and send an Ultrafrigid Beam at Samus, and lastly Thardus will curl up into a ball and attempt to crush the enemy.

To defeat the behemoth, Samus must use the Thermal Visor to locate Thardus's weak spot, then fire at it with a weapon, preferably a single Super Missile. Once Samus hits the spot a few times, Thardus will release enormous amounts of thermal energy as its Phazon core is exposed, making the Visor overload. When using the Thermal Visor, Samus must take caution as her thermal vision can be temporarily impaired by a destroyed charged rock Thardus hurls at her.
Alternatively, Samus can wait until the beast begins to roll around the room. At this point, laying a single Bomb in its path will instantly smash open the weak point.

Regardless of how the Phazon is exposed, she must then switch back to the Combat Visor and fire at the weak spot. Thardus will continually switch weak spots until the third weak spot is hit. Then it will unleash an ice storm, making it hard to see in the Combat Visor. After the sixth weak spot is destroyed, the creature will dispel the ice storm, so visibility returns to normal. He also noticeably speeds up at this point and will hurl additional rocks, as he only has one more weak point that must be attacked. Samus must continue the process, until the creature explodes once the seventh weak spot (which incidentally takes more hits than the others) is destroyed, leaving behind the Spider Ball. Humorously, a large rock hits Samus in the head after she moves out of the way of the falling boulders, making a sound similar to that of a metal drum.

Thardus also made an appearance in Metroid Prime Pinball, as a boss for the Power Bomb upgrade, and in the Metroid Prime comic, appearing in the Chozo Ruins. A remix of Thardus' battle theme is used for the clash with it in Pinball.

"Thardus is a towering, sentient creature of stone charged with Phazon radiation. Thardus attacks its prey through a variety of well-developed techniques. It can hurl huge boulders at its prey, or curl itself into a gargantuan bone-crushing ball. Thardus is also able to encase its targets in ice, making it an extremely dangerous foe.

Thardus's body consists of dozens of boulders held together through the power of the Phazon's radioactive charge." 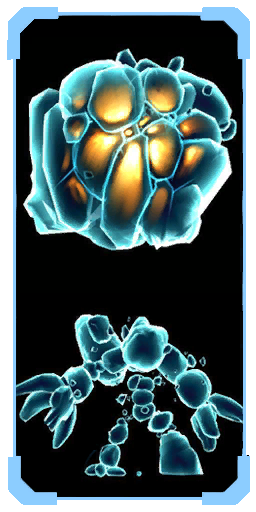 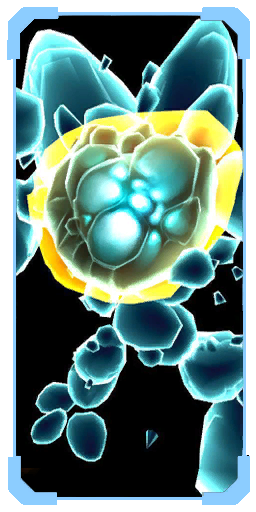 The Phazon radiation given off by Thardus negates auto-targeting systems, preventing lock-on. It may be possible to acquire alternate targets with a different Visor. The chaotic nature of Phazon irradiation leads to instability in its structural integrity. Thardus can encase targets in ice, and its colossal size and strength make it a formidable opponent.

"Project Titan specimen is immobilized in Quarantine Cave. Relocation is recommended due to increased violent activity."

"East Quarantine Cave has been secured. Specimen remains in the Quarantine area. All experiments have been suspended pending pacification of area."

"Research on Tallon IV is expanding into new areas. Pending stabilization of the Thardus venture, we will expand Inanimation research to include other native Tallon IV materials."

"The taming of Thardus continues. Barring unforeseen setbacks, it can be installed on Phazon mine patrol by Lotus Milestone."

Mike Sneath created the model for Thardus based on Greg Luzniak's original concept art. He indicated that despite Thardus' appearance, it was actually easy to model, although he was unable to speak to the challenges of animating it. Thardus consisted of one model, with each part animated separately. The animated particles of snow, dust and rock fragments were added later in production by another artist.[1] Thardus was inspired by Gorignak from Galaxy Quest; Sneath originally revealed this in a 2010 interview with Shinesparkers, but he could not recall the movie.[2] Jack Mathews confirmed it was Galaxy Quest in a 2022 interview, and said Mark Pacini had seen it and came up with Thardus afterwards.[3] In the film, the main character (Jason Nesmith / Commander / Captain Peter Quincy Taggart, portrayed by Tim Allen) comments that Gorignak is "...a rock! It doesn't have any vulnerable spots!".

According to Sneath, Thardus was intended to be fought in a "large lava pit arena" (in the Magmoor Caverns), but it was moved to the Phendrana Drifts due to time constraints. This is supported by a Derek Bonikowski character animation (see below) that depicts Thardus with an orange core instead of blue.[2]

Thardus in a state of inanimation.

The creature's core is exposed.

Thardus seen with the X-Ray Visor (via sequence breaking).

In rare instances, Thardus may become stuck inside a wall. This glitch can easily be remedied once Thardus rolls once more.