The Legend of Zelda

This article refers to the Zelda franchise's involvement with the Metroid series. For the titular character, see List of characters in the Super Smash Bros. series#Zelda.

The Legend of Zelda, also sometimes referred to simply as Zelda is a fantasy-adventure video game franchise published and produced by Nintendo. The main protagonist is named Link, while "Zelda" refers to the princess who often acts as a central character, including a damsel in distress, to the franchise. Zelda and the Metroid series have made several crossovers, with characters or elements from each other's series appearing occasionally in the other franchise, or the characters (particularly Link) and Samus Aran appearing together in a game outside of the Zelda or Metroid series. The major example of this is Samus appearing alongside numerous characters from the Zelda series and sub-series in the Super Smash Bros. franchise, with Samus and Link being among the twelve fighters (termed the "perfect-attendance crew") who have appeared in every installment of the series to date.

References to Metroid in Zelda[]

Although no direct references to Metroid have occurred within the Zelda franchise since their creation, The Legend of Zelda: Ocarina of Time Master Quest featured a trailer for the then-upcoming Metroid Prime as part of the bonus features for the game. In The Legend of Zelda: Twilight Princess, the large Freezard enemies resemble an adult Sheegoth, as both have a reptilian appearance, several eyes on the sides of their heads, have ice crystals sprouting from their backs, and have an icy breath attack. During development for what ultimately became The Legend of Zelda: Breath of the Wild, it was initially considered that the game would have elements of science fiction, with one piece of concept artwork depicting Link in a spacesuit with a Metroid larva hovering near him.

Although not confirmed to be a reference to Super Metroid, the main antagonist of Phantom Hourglass, Bellum, had several similarities to Phantoon, namely in their being giant cycloptic cephalopod-like creatures that were heavily implied to be evil spirits or at the very least the manifestation of a great evil. Coincidentally, the method that Bellum feeds on people resembles a Metroid in that it feeds on peoples' life force, and even turning them to stone (as demonstrated with Tetra), the latter being similar to how successful metroid drainings leave their prey brittle. 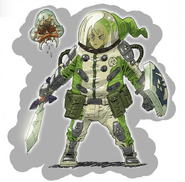 Breath of the Wild concept art featuring a Metroid larva.

References to Zelda in Metroid[]

In the comical Victory Techniques for Metroid, which breaks the fourth wall, Samus is seen playing The Legend of Zelda while traveling to Zebes in her Cosmo Liner. Similarly, one of the short stories in The Shape of Happiness features a Galactic Federation official offering Samus a copy of Zelda II: The Adventure of Link and Kid Icarus as payment for going to Zebes, but she does not respond.

The conflict that takes place during Metroid Prime 2: Echoes was inspired by the main plot of The Legend of Zelda: A Link to the Past regarding a light and dark world. In fact, Retro Studios went as far as to bring in one of the co-developers for A Link to the Past specifically so they could properly incorporate the light/dark world gameplay element. On a related note, the method in which Samus has to defeat Dark Samus in her final battle with her in the game resembles Dead Man's Volley, a technique required for defeating certain bosses that debuted in A Link to the Past. Some of the sounds for the Hunter Ing were similar to sounds utilized by the titular antagonist in the first phase in the final boss fight of Majora's Mask.

The Seeker Missiles' locking on to 5 targets per salvo in Metroid Prime 2: Echoes, Metroid Prime 3: Corruption, and Metroid: Other M is similar to how the Boomerang is utilized in some Zelda games, particularly The Wind Waker and Twilight Princess.

The Ship Bumper Stickers in Metroid Prime 3: Corruption (and by extension, Metroid Prime Trilogy) include The Legend of Zelda: Twilight Princess. If a save file for this game is present on the Wii, a sticker of the Hyrulian royal crest will appear atop the Gunship.

The Pow enemy from Metroid: Other M shared similarities to the fairies from various 3D Zelda games, and in particular Navi from Ocarina of Time. On that note, the concept art for the Skultera had a speech bubble saying "Buy Somethin', Will Ya!", referring to a famous line from the first The Legend of Zelda game. Finally, before the Brug Mass battle, Samus tells Adam "It might be dangerous for your men to go alone", which is a possible reference to the famous line "It's dangerous to go alone!" from the original Zelda.

The Energy Tanks in Metroid Dread were revamped to require four Energy Tanks to add a new portion of Samus's health bar. This resembles the Piece of Heart item/mechanic from the Zelda games starting with A Link to the Past.

Samus playing The Legend of Zelda in Victory Techniques for Metroid.

Samus being offered a copy of Zelda II in The Shape of Happiness.

In the CoroCoro Comic manga adaptation, Samus worked alongside Fox McCloud as henchmen of Phantom X, who in reality was Link, and also staged a kidnapping of Yoshi in order to have Mario, Donkey Kong, Pikachu, and Kirby work together for a change.

Zero Suit Samus was also introduced in Brawl as an alternate form of Samus, wearing her blue form-fitting suit from Metroid: Zero Mission, similar to Sheik being an alternate form to Zelda. Although no new characters from either Zelda or Metroid debuted in Super Smash Bros. for Nintendo 3DS and Wii U, Sheik and Zero Suit Samus were split off from Zelda and Samus, respectively, becoming separate characters.

In Bowser Jr.'s debut trailer "The Future of Evil", Samus and Link were among the seven characters facing him. At one point during the gameplay portion, Zero Suit Samus is seen standing on a step on the Skyloft stage and firing a Steel Diver at Bowser Jr. Both Samus and Link, alongside various Mario characters appeared as their NES sprites in promotional materials for Duck Hunt and Pac-Man.

In Melee, both Link and Samus are opponents in Event 3: Bomb-fest, due to both utilizing bombs as weaponry. Zelda is one of the opponents in Event 15: Girl Power, alongside Samus and Princess Peach from Mario. In Brawl, the event match Co-Op Event 7: Battle of the Dark Sides has both Link and Samus teaming up to face off against their dark counterparts, specifically Dark Link and Dark Samus, respectively. Despite the name, however, it has no relation to Dark Samus in the Prime series. Likewise, Co-Op Event 6: Unwanted Suitors sees Zelda and Zero Suit Samus teaming up to defeat Luigi and Captain Falcon. In Smash 4, Zelda/Sheik has to defeat both Samus and Zero Suit Samus in Identity Crisis, while both Zelda/Sheik and Samus/Zero Suit Samus are opponents in Peach in Peril. Zelda and Link are mentioned in Palutena's Guidance for Samus during their tongue-and-cheek reference to the misconception between Metroid and Samus regarding names of the protagonist.

In the first trailer for Super Smash Bros. Ultimate, Link is prominently displayed. Donkey Kong's hair and Samus's shoulders can be barely made out from the outline of fighters underneath the flaming Smash symbol. All characters from the Zelda and Metroid franchises return in Super Smash Bros. Ultimate, including Young Link, and in addition to newcomers Ridley and Dark Samus. Mario appears with Samus and Mega Man in A Piercing Screech, Ridley's reveal trailer, where the trio walk across a bridge, until Ridley ambushes and kills Mario and Mega Man, while Link appears during the gameplay portion of the trailer where Ridley uses his Skewer to impale Link and then watches as Link crumples to the ground and then explodes.

In Ridley's announcement trailer for Ultimate, Ridley briefly uses his Skewer on Link, causing him to collapse and explode as Ridley watches. In addition, Zero Suit Samus was used as the Puppet Fighter housing Urbosa's spirit from Breath of the Wild, which was later referenced when Zero Suit Samus was one of Zelda's minions in the spirit battle against Zelda's Breath of the Wild incarnation.

Ridley's Classic Mode ending has him roaring and screeching in a similar manner to his up taunt with Rathalos from Monster Hunter doing the same as Yoshi watches in awe at the Bridge of Eldin stage from The Legend of Zelda: Twilight Princess.

In Samus's Palutena's Guidance in Smash 4 and Ultimate, the misconception among new players that Link's name is Zelda and Samus's is Metroid (because of their series names) is discussed.

Owing to both franchises being included in NES Remix 2, Samus and Link also appear in their NES sprites in various aspects relating to the game. The game icon for the Wii U features Samus alongside Link (specifically, his incarnation from Zelda II: The Adventure of Link) as well as Mario.

Other appearances of both franchises in other games/media[]