All weaponry, most effective are Plasma Beam and Boost Ball

Tinbots are androids that can be found at SkyTown on planet Elysia.

Tinbots are weak enemies made with a lightweight metal that is vulnerable to heat, explosions, and high-speed impacts. Their weapons are kinetic beams that do little damage and just push Samus Aran backwards, and claws that are easily avoided. If Samus gets too close, it will shoot puffs of steam at her that do some damage, as well as pushing Samus away and fogging up her visor.

They can easily be destroyed by knocking them over with a Missile, Charge Beam shot or the Boost Ball (knocking three over in one boost will earn the player a "Bowling for Bots" Friend Voucher). If a group of Tinbots are standing close enough together, several can be launched with a single shot. If defeated with the Plasma Beam, they melt into a liquid puddle and disappear. Some can enter Hypermode. Those that enter Hypermode become heavier and can no longer be melted.

Both of the Tinbots' arms can be shot off, preventing it from swiping and shooting. This, however, won't stop it from producing steam. 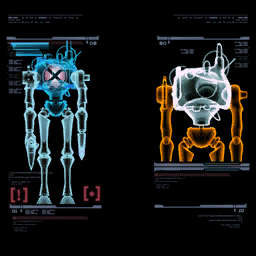 Mechanoid: Tinbot
Lightweight android that is easily knocked down.

Tinbots are made from a lightweight metal and can easily be knocked around from explosions or high-speed impacts. This metal is also quite vulnerable to heat and can be melted by high-temperature weapons. Converted for security duty, the Tinbots now patrol SkyTown tirelessly. They are armed with kinetic-beam pistols and can use their tool-arms in close combat.

An ATC attacks Tinbots on Elysia.