Todd Keller was previously the Art Director for Retro Studios and the Prime Series. Keller is the co-founder of Armature Studio, a company formed by Keller and two other former key designers at Retro Studios, Mark Pacini and Jack Mathews. Keller is married to Elizabeth Foster, an environment artist on the Prime series.

Keller was credited in Metroid Prime, Metroid Prime 2: Echoes and Metroid Prime 3: Corruption. As head of Art, Keller worked with the various artists and assisted them during production. His work includes the conceptualization of the flower in which Flaahgra is situated, the Parasite Queen and Reactor Core, and the basis for Phazon. Keller also worked with Matt Manchester to create an ore with Phazon that is present in the Phazon Quarry room of Corruption.

In the early stages of Prime's development, Andrew Jones would submit character concepts to Keller for internal approval, and Keller would then have to send them to Nintendo in Japan for final approval.[1]

"Todd Keller created a concept for giant plant flower that Flaahgra sits inside of."

"Working with Todd Keller, the art director, we came up with an idea for a type of mineral/metal on this planet that was a mix between wood and muscle in it's shape, but actually composed of metal ore, with veins of hot blue glowing substance inside."

"Lead Art Director, Todd Keller, was once again credited for the wonderful harmony in the style and design of the Parasite Queen and Reactor Chamber, which was vital to insure that it didn't appear as if two different artists had worked on the scene."

"Todd Keller one day told me that the game story was going to be centred around a posionous substance called Phazon and wanted me to do a concept. All he knew was that he wanted it to be blue."

"'Chain Cleat'-old sketch for metroid that i didn't use-
I liked the colors on this but it became a little too rpg once i had drawn it out-not appropriate for the world i eventually decided upon." There appears to be a dragon-like head constructed in its side.

"-old sams phazon infected
I don't know why i post this it's kinda ridiculous, but i always liked it. Originally this was the idea for the us cover.(at least the first thing i thought of in the meeting)-so i sketched this. I like it cause to me it looks like Samus is actually like 'whoa! my hand is burning! infection!' yes!" 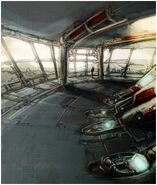 "-older Gf ship sketch
This was a pretty small thumbnail i blew up and put some colors over, not finished at all, but it led to a variety of geometry created for the game. Actually i wish i could have done more of these as i think they are quite helpfull in figuring out some of the rendering situations you might have in a game before you fully start designing a world.....maybe i'll do that next game? maybe.(copyright nintendo 2007)-this was released in nintendo power last month." 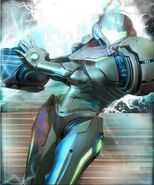 A render of Samus Aran created for Metroid Prime 3: Corruption.

A render created early in the development of Metroid Prime 2: Echoes, while Keller was experimenting with in-game rendering.

An earlier, "heavy metal" cover for the Metroid Prime Trilogy.

An unused concept for the cover of Metroid Prime 3: Corruption.
Add a photo to this gallery

Retrieved from "https://metroid.fandom.com/wiki/Todd_Keller?oldid=262376"
Community content is available under CC-BY-SA unless otherwise noted.