Battle with the Torizo, Bombs

The "Torizo's chamber" is a room in Crateria. It appears only in Super Metroid.

The Torizo's chamber is a small, square room that has a somewhat similar appearance to the old Tourian rooms nearby, as they consist of the same architecture. It is unlikely to have been a part of Tourian however, given its location above the former Tourian's ruins.

Samus Aran enters the Torizo's chamber and finds what appears to be a normal Chozo Statue holding the Bomb power-up. Once she collects the Bombs, the door seals behind her and the Chozo Statue breaks open, revealing the Torizo. It stands up and changes color, initiating the battle. Once the Torizo is defeated, the door unlocks.

During the escape sequence at the end of the game, Samus can choose to return here for an optional ending. She finds the Etecoons and Dachora that assisted her during her mission trapped within the room with scalding-hot lava rising. If Samus shoots the wall behind the Torizo's former location using her Hyper Beam, it breaks, allowing the Etecoons and Dachora to escape to an unknown ship. If this is done, a small white ship is seen shooting out of Zebes after it explodes. While saving the animals is optional, doing so is considered canon as they later reappear in Metroid Fusion.

Despite the rocky cave's appearance in Metroid: Zero Mission, this room is not present. It may have been unearthed in excavations from the scientists who worked on Zebes following the Zero Mission, or the Space Pirates in their rebuilding efforts.

This room is entered from a stonework corridor that is filled with Mellows. It leads, from the bottom right wall, to an unknown destination.

Bombs
Once Samus enters the room for the first time, the bombs will be lying in the disguised Torizo's hands.

Rescue Friends (page 118)
"Time permitting, you can rescue your friends, Dachola[sic] and the Etecoons. Remember where you got the Bomb Item? That's where you need to go! Blast the wall on the right side of the room that they are in to make an exit for them, then hightail it back out the way you came in. Get to the ship!"

The Bomb (page 19)
"This is one of the most useful items of all - the bomb. Be careful, though - as soon as you take it, Torizo appears and must be defeated before you can continue (see Torizo section). Once you have it, you're able to open many new avenues by blasting away obstacles and rubble. To set it, roll into a ball and press [X.]"

The Torizo disguised as a Chozo Statue. 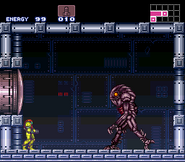 The Torizo launching bombs at Samus. 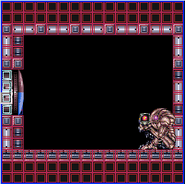 The room in SMILE.
Add a photo to this gallery
Retrieved from "https://metroid.fandom.com/wiki/Torizo%27s_chamber?oldid=280391"
Community content is available under CC-BY-SA unless otherwise noted.