Totem Access is a room in the Chozo Ruins. It appears in Metroid Prime. It consists of two tunnels leading to a slightly more open central section. This area is fairly dark, though lit by a Plazmite, and its floor is covered with toxic water until Flaahgra has been defeated. A platform in the center contains a storage container that always has a red Energy Capsule inside, and some Tangle Weed.

Internal Map data refers to this room as "Monkey_Hallway". This is likely a reference to the scrapped blood monkey.

Jack Mathews revealed in a 2015 livestream that the Totem Access room was made tilted as the result of an accident during the room's creation. It was retained because the developers liked the look of it.[1] 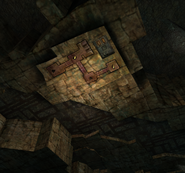 The texture on the ceiling. 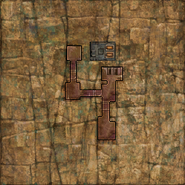