Super Metroid
Zero Mission
Tourian (ツーリアン, Tsūrian?) was the main headquarters and research facility of the Space Pirate fortress on planet Zebes, and was home to the Zebesian Command Center, which housed the heart of the Pirates' Zebes operations and boss in all three Zebes-based Metroid games: Mother Brain. Tourian was composed almost entirely of metal materials and hardware, with corridors formed through alloy pipework. Pools of lava filled certain rooms of the area. Artificial lifeforms and constructs, such as Rinkas, Zebetites, along with Cannons, provided defense and security for both Mother Brain and presumably her Pirate forces. Hordes of Metroids were also present; it is here where they are researched, grown and multiplied through exposure to beta radiation.

The first Tourian was originally built by the Chozo, with modifications and additions being made to it by the Space Pirates after the former abandoned Zebes and/or were exterminated by the latter. Surprisingly, while this was indeed the main HQ of the Pirates, there were none of the marauding race to be seen in the original Metroid. This is later explained by Metroid: Zero Mission; when Samus first enters Tourian, a cutscene shows a Metroid outbreak has occurred, killing all Pirate personnel; in-game, many corpses of Zebesians can be seen throughout Tourian.

After the defeat of Mother Brain, a Time Bomb incinerates the facility and reduces it to ruins, causing an acid waste to leak afterwards, which can be witnessed in Zero Mission if Samus returns after obtaining the Fully Powered Suit. It is unknown what the substance is or how it appeared, but it is harmful even with the protection of the Gravity Suit. It is most likely some sort of waste from the now inactive power systems in the destroyed area. This same substance is present onboard Sector 1 (SRX) of the BSL station, in the Tourian-like area before fighting Neo-Ridley. The green liquid is nowhere to be seen in Super Metroid. However, the rebuilt Tourian has two magma-like substances that also ignore the Gravity Suit's protection.

Most of the facility is curiously in perfect condition: only the room just before the Zebesian Command Center, the chamber itself, and the escape shaft are damaged. This is odd considering that the explosion of the base was large enough to be witnessed from space. The Craterian rocky cave right outside of Tourian, despite emitting smoke during the countdown, hardly shows any sign of damage by the explosion. Even the elevator connecting Crateria and Tourian seems to be fully operational, despite being at the epicenter of the explosion.

Early on during her second mission to Zebes in Super Metroid, Samus travelled through the ruins of the original Tourian from her Zero Mission, which became integrated into the Crateria region. However only the Zebesian Command Center and the escape shaft are present; all other rooms are missing, possibly due to Pirate reconstruction. The mission ultimately leads to a second, newly constructed Tourian found in a different location. Unlike the original, this headquarters was completely built by Space Pirates and Kihunters during the events of the Prime series. In the rebuilt base, Metroids are once again the main threat leading up the path to the resurrected Mother Brain, but whether they broke loose again or were intentionally released this time is unknown. Space Pirates populate the sections found behind Mother Brain's command post.

The reconstructed Tourian has several rooms filled with two different substances resembling lava/magma. The first substance, located in the rooms prior to Mother Brain, is concentrated and thick while the liquid found in the pirate leader's chamber is clear and fluid; the latter seems to be the same scalding-hot lava found in Ridley's Hideout. Both of these substances are functionally identical, and they are more harmful than the basic lava that used to fill the original Tourian, since they harm Samus even while wearing the Gravity Suit. The clear, fluid lava is seen flooding the Pirate HQ during the escape sequence.

While the first Tourian was devoid of any natural soil, plant-life or native animals, the second Tourian featured a nature zone (seemingly a simulation) where several wildlife of Zebes resided, along with the baby that Samus spared during her mission on SR388; however, more than half of these natives were devoured by the baby, leaving nothing but their brittle husks. These rooms are also encrusted with a barnacle-like material, blocking Samus's path. Exposed scaffolding and circuit boards are prominent features in this location, indicating that construction is an ongoing process. With the defeat of the reborn Mother Brain, a self-destruct sequence is initiated again, only this time it is not solely for the main headquarters, but for the entirety of Zebes as well. Near the final moments of Super Metroid, Samus ascends the old Tourian's escape shaft once again. Ultimately, the rebuilt Tourian was eradicated, along with the entire planet by the end of the game.

Tourian was the final area in both of Samus's missions to Zebes. Since it contained Mother Brain and served as the heart of the Pirate operations, it could never be accessed on a whim. The entrance to the two Tourians, located in Brinstar (in Metroid and Zero Mission) and Crateria (Super Metroid), were guarded by statuary connected to the life signs of the Space Pirate commanders Kraid and Ridley. In her second mission, Phantoon and Draygon were included with Kraid and Ridley in a set of Golden Statues that turned dull in color and sank into the ground after Samus killed each commander. In Metroid, Tourian could be accessed early through Sequence Breaking, by luring a Reo into the room from Corridor No. 2 and freezing it, then jumping off of it over the acid.[1] In Super Metroid, a variation of the Door Jump can also allow her to enter Tourian without killing any Pirate commanders.

Metroid: Other M features Sector Zero, an unseen area located on the BOTTLE SHIP. This sector was created by the ringleaders, who used it to propagate unfreezable Metroids for Project Metroid Warriors. "Madeline Bergman" compares it to Tourian. The Metroids were controlled by an AI similar to Mother Brain, MB. The sector was detached and destroyed by Adam Malkovich. The second Tourian from Super Metroid was also seen in a flashback seen at the beginning of Other M.

In one of the preview trailers for Metroid Prime 3: Corruption, a facility resembling the Zebesian Command Center from Super Metroid is shown in blueprints belonging to the Galactic Federation for a Future Aurora Complex.[2]

In all three games, the theme of Tourian plays in the currently-occupied base.

The eerie theme that plays during Tourian's intro cutscene in Zero Mission is a remix of Opening (Destroyed Science Academy Research Station), the Title Screen theme of Super Metroid. In Metroid and Zero Mission, Zebetite plays in the Zebesian Command Center until Mother Brain's defeat, at which point Escape plays during the countdown.

In Super Metroid, Planet Zebes - Arrival on Crateria plays in the old Tourian ruins until Samus acquires the Morph Ball; after this, it is permanently replaced with Crateria - The Space Pirates Appear. A tense theme plays in the sandy rooms occupied by the Big Metroid. During the final countdown, an alternate "escape" version of Big Boss Confrontation BGM (Ridley, Draygon) plays in both Tourian bases.

"Tourian is the control center for the Zebesian space pirates and the Mother Brain. The original Tourian was located just below the surface. After Samus Aran annihilated the forces of Zebes the first time, this new Tourian was built in a more secure area."

Zebes - A Visitor's Guide
"The final area, where Mother Brain lies in wait. The space pirates also use this area as their base. Only when Samus has explored all other areas and collected the necessary weaponry should she dare take on Mother Brain."

Tourian (page 69)
"This is it - the final stage of the entire mission. Samus has gained valuable experience and, hopefully, a wealth of weaponry, yet she'll need to dig deep if she's to overcome the final obstacles placed in her way.

Tourian isn't a very large area, yet it does contain some of the strongest enemies as well as plenty of precarious traps. Only when you have vanquished all four of the main guardians from the other areas can you even dare venture in Tourian, though."

"This is the core of Zebes. It is in this deepest level that the mechanical life-form Mother Brain can be found."

The sandy area where the Big Metroid is kept 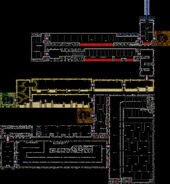