Wikitroid
Register
Don't have an account?
Sign In
Advertisement
in: Pages with conjectural titles, Rooms, Tourian,
and 5 more

Last room in Metroid
Final room of the original Tourian

The "Tourian escape shaft" is the final room explored in Tourian during Metroid and Metroid: Zero Mission. It returns in Super Metroid as one of only two surviving rooms from the original Tourian.

The room is a tall vertical shaft with multiple midair platforms, presented as blue and elongated in Metroid and Super Metroid. In Metroid, there are exactly fifty ledges. At least six at the bottom and two near the top of the shaft are longer, while the rest of them are no larger than a Rinka and appear to be oriented to the right side of the shaft. An elevator, presumably to Crateria, is at the very top and stepping onto it ends the game.

In Super Metroid, the elevator platform remains, but the platform is gone and the upper elevator shaft is replaced with a Blue Door. The platforms are now roughly the same length and a darker blue, and scaffolding can be seen extending into the background. The bottom left wall can be destroyed with Bombs, which leads to a door that remains locked until the end of the game. Toward the bottom of the shaft, there is now a short platform against the right wall. Using Bombs at the base of the platform will open a secret tunnel to a Yellow Hatch, which leads to a room with an item. The one-way alternate exit from that room is positioned at the top of the escape shaft, behind another wall. These hidden alcoves in the room contain pipes in their tilesets.

Zero Mission changes the platforms to square shapes and most of them are Pit Blocks, which crumble after a short delay, but respawn. Failing to jump off of a Pit Block platform in time on Hard Mode - where Samus only has one minute to escape Zebes - can mean a Game Over. There are platforms attached to the wall that do not crumble, made of Fake Blocks. Samus can ascend the platforms quickly using the Power Grip. During the escape, there are now effects such as explosions, steam blasts and crumbling debris. After Samus leaves Zebes, the escape shaft is shown in a cutscene as about to explode.

Samus can return to this room after she acquires the Fully Powered Suit. Following Tourian's destruction, the room has fallen into disrepair, most noticeably with rebars and other components protruding from the walls (in the background). The elevator still functions despite the explosion, although the door from the Zebesian Command Center has been demolished.

Immediately following the death of Mother Brain, a self-destruct sequence is activated and Samus has a limited amount of time to escape Tourian's destruction. Samus ascends this shaft in order to leave Tourian. Metroid ends as soon as she steps onto the elevator, but in Zero Mission she has to pass through the rocky cave to the Landing Site.

By the time of Samus's second mission to Zebes, this shaft has been amalgamated into Crateria along with the original Zebesian Command Center. Both are desolate, in ruins and covered in fog when Samus first returns to them; however, upon returning after encountering Eye cameras in the first and third rooms of "old Brinstar", the shaft becomes populated with Wall Jumping silver Zebesians.

During the second countdown at the end of the game, Samus exits from the new Tourian into this shaft, and once again ascends it to escape Zebes. The room gradually fills up with scalding-hot lava. If Samus speed runs into the room and past the two Pirates blocking her path, she can Shinespark up the far right side of the shaft, ascending much of it automatically.

In Metroid, once Samus boards the elevator, the game ends with her standing on the surface of Zebes and does not show where the elevator stops.

Missile Tank
Zero Mission only, after Tourian's destruction. To reach it, Samus must speed run from the corridor before the Zebesian Command Center and then Shinespark through the room and ruined door. She will fly into the escape shaft and through the left wall, into a hidden area with this Missile Tank.

E. EXIT FROM TOURIAN (pg. 34)
"You can locate the exit from Tourian early in the game, but you won't be able to enter it - it's a metal door. After defeating Mother Brain, this is the same door that you'll exit through on your way back into Crateria." 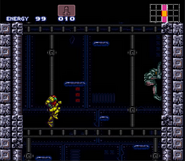 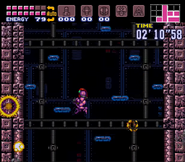 Samus ascending the shaft during her second escape.

The room, as seen in SMILE
Community content is available under CC-BY-SA unless otherwise noted.
Advertisement