The "Tourian ledged shaft" is a room in Tourian. It appears in Metroid and Metroid: Zero Mission, with visual differences between each version. A similar, much shorter room appears in the second Tourian during Super Metroid.

In both games, this room is a tall shaft with multiple ledge platforms stretching from either wall, hence the name. In Metroid, the platforms appear to be comprised of a wide pipe, with metal bricks at either end. Platforms on the right wall seem to be positioned higher than those on the left. At the bottom of the room are five wide blue platforms, similar to that seen in the entrance and escape shafts. There are nine Metroids in this room and infinitely spawning Rinkas. Samus does not need to kill the Metroids to leave the room, but can do so to regain energy or Missile Ammo.

In Zero Mission, the room's platforms are now mostly metal, although a few retain their pipe-like sections. Rinka generators are clearly shown in the walls, whereas in Metroid, they appear out of nowhere. Three of the ledges are now littered with Zebesian brittle husks, with two more at the very bottom of the shaft. Four of the midair platforms at the bottom are still there, but colored grey. Unlike in Metroid, the doors are locked until all Metroids are killed.

Curiously, this room remains intact after the destruction of Tourian, although the Rinkas no longer spawn on subsequent visits.

Hard Mode in Zero Mission adds an additional Metroid to this room, making seven, while on Normal Mode there are only six.

204 LET THEM COME TO YOU (page 74)
"The floating green fiends appear from below in the long shaft that reaches to Tourian's lower-right corner. Run to the edges of the platforms, then retreat to lure the Metroids up to your level." 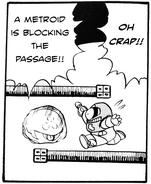 A brief appearance of the room in Victory Techniques for Metroid.

The room on a hand drawn map in Victory Techniques for Metroid.
Add a photo to this gallery
Retrieved from "https://metroid.fandom.com/wiki/Tourian_ledged_shaft?oldid=281828"
Community content is available under CC-BY-SA unless otherwise noted.