The Training Drone is a Galactic Federation mechanoid. It is used in all branches of the GF military. They are designed to improve a Federation Marine's hand-eye coordination and accuracy. Drone Juggling is a popular training exercise, where the participant attempts to score as many consecutive hits on a drone as possible.

In Docking Bay 5 on the G.F.S. Olympus, Samus has the ability to play a Mini-Game involving the drones. Juggling either of the Training Drones 10 times earns Samus a Gold Credit, and by scoring 20 times she earns a Friend Voucher. The drone minigame can still be played even after the Berserker Lord battle despite Samus being needed below on Norion. 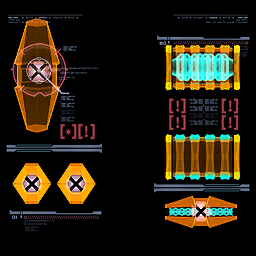 The Training Drone is used in all branches of the GF military. They are designed to improve hand-eye coordination and accuracy. One popular training exercise is to score as many consecutive hits on a drone as possible. Gambling on shooting contests involving Training Drones is often frowned upon, but fairly popular throughout the GF armed forces.

Retrieved from "https://metroid.fandom.com/wiki/Training_Drone?oldid=218686"
Community content is available under CC-BY-SA unless otherwise noted.