The "training outfit" is a white or silver jumpsuit, seen being worn by a younger Samus in the Japanese version of Metroid Fusion, in three of the better endings on Normal Mode when Child Mode is enabled. It has no known official name, but it has appeared in multiple types of media. The outfit is a sleeveless jumpsuit with a separate top, lined pants and boots, and accompanying bracelets that may or may not be used to summon the Power Suit. Samus is seen wearing it while running and swinging during her training with the Chozo. She consistently wears the outfit with her hair down. Seeing as she is shown in the outfit at three different ages in her life, it is possible that it was her consistent uniform prior to her acquiring the Zero Suit.

While these endings are exclusive to the Japanese version, they can be unlocked in Metroid: Zero Mission by linking it to Fusion via the Game Boy Advance Game Link cable.

Samus also wears this outfit in the Magazine Z manga's second chapter, which depicts her training with the Chozo. The e-manga version colors her hair a light brown and the outfit a light pink, which is a possible reference to the Justin Bailey bikini from Metroid. 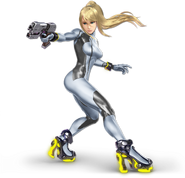