"Transport to Kraid" is a room in Brinstar. It appears, with some differences, in Metroid and Metroid: Zero Mission. It may have also appeared in Super Metroid.

In both games, this is a small room containing an elevator and a large statue resembling a monstrous creature to the right. In Metroid, this room appears to be mostly of artificial construction, while in Zero Mission it is set in a cave. The elevator leads to Kraid's Lair, and the room can only be accessed once Samus has collected Bombs, as she needs them to destroy an obstruction in the previous room leading to this one.

The statue in Metroid has an open maw with two front teeth and appears to be extending its neck forward, with a clawed hand holding it up steady on a group of blocks. In Zero Mission, the statue only appears as a reptilian-like head embedded into the cave wall, with a closed mouth, two red eyes and nostrils. After Kraid is defeated and Samus re-ascends the elevator into this room, the statue collapses and crumbles, revealing a hidden path to a secret room. This path is inhabited by Zoomers, and has three rocky pillars in the foreground, which appear transparent.

In Super Metroid, the door to this room in the previous shaft is missing, making it inaccessible. However, a room very similar to this one is present elsewhere in Brinstar, even including a statue much resembling that of the original Metroid. It is unlikely to be the same statue and room however, given that this room exists far to the east of the Fake Block shaft and Zero Mission retcons the statue as having crumbled.

KRAID'S HIDEOUT (pg. 40)
"Make sure you have extra tanks, the bomb device and missiles before venturing into Kraid's lair. Visit Ridley's hideout before going after Kraid."

069 KRAID EXPRESS (pg. 43)
"Run to the right from the bottom of the shaft to find the elevator to Kraid's lair. Ride down to the lair and prepare for battle."

107 RIDE STRAIGHT UP AND HEAD RIGHT (pg. 51)
"When you arrive at the top of the elevator shaft, the right wall will fall apart, giving you access to a Chozo Statue at the end of a short corridor. The statue will point you toward the Hi-Jump upgrade." 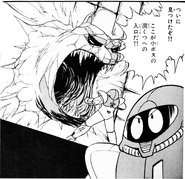 Samus enters the room in Victory Techniques for Metroid. 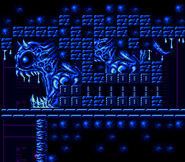