Wikitroid
Register
Don't have an account?
Sign In
Advertisement
in: Articles with non-canonical information, Species, Tallon IV,
and 6 more
English

VS. Giant Beetle
The Triclops is a species of small creatures that Samus only encounters in the Magmoor Caverns.

They prowl tunnels and can survive high temperatures. They collect small creatures and bits of foodstuff, then deposit them elsewhere for later consumption. Their hard tripartite mandibles are used to move earth and rock. The strength of these mandibles is incredible; they can grasp the Morph Ball so tightly that it is nearly impossible to escape once grabbed.[1]

When Samus encounters them while in Morph Ball form, they will scuttle towards her, and if Samus winds up in one's path, the Triclops will utilize a sort of air-suction that will drag her into its mandibles. After being grabbed, they will then carry her around the tunnels (usually back to the beginning of a maze or pathway) and "spit" her out, damaging her while doing this. To avoid this, Samus must lay a Bomb as a trap of sorts. The Triclops will then go for the Bomb and attempt to take it to a personal depot area for later consumption. However, the bomb will promptly detonate a few moments later, killing the Triclops.

If Samus is caught by one of them, it is possible to escape from their grip by moving the control stick back and forth very quickly (or by rapidly pressing B in the Wii versions); she will still suffer damage, but the Triclops will let her go without throwing her away.

In Metroid Prime Pinball they can be found in the Phendrana Drifts stage and can be summoned in the Triclops Terror minigame on the Tallon Overworld stage, though they are only found in Magmoor Caverns in Metroid Prime.

According to Metroid Prime 2: Echoes, the Triclops are impossible to domesticate. Instead, Samus encounters mechanoids built by the resident Luminoth on Aether called Mechlops. Their scan states that the Luminoth, seemingly finding use in their "earthmoving power", attempted to domesticate and train a number of Triclops to use in combat, without success. Thus, the Mechlops were built to replace them. These creatures act identically to their organic counterparts.

"Triclops are hunter-scavengers. They collect small creatures and bits of foodstuff, then deposit them elsewhere for later consumption. The hard tripartite mandibles they use to move earth and rock are quite strong and grasp prey in an almost unbreakable grip.

The Triclops is a hard-shelled creature with powerful tripartite mandibles. Resembling a beetle, the Triclops walks close to the ground on multiple legs." 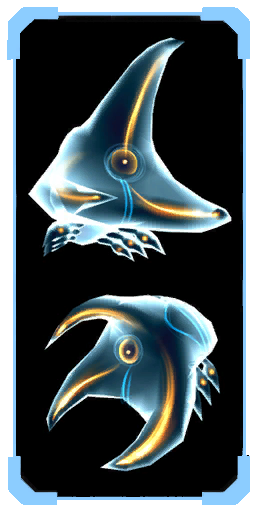 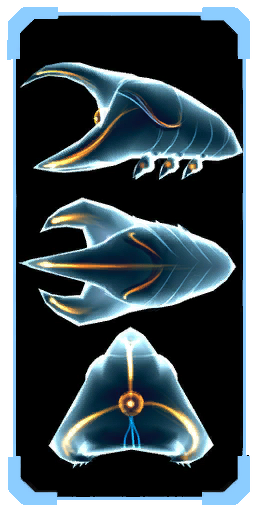 The Triclops is a hunter-gatherer. It collects small creatures and bits of foodstuff, then deposits them elsewhere for later consumption. The hard tripartite mandibles it uses to move earth and rock are quite strong and difficult to escape once ensnared.

The small stature and earthmoving power of a Triclops makes it a valuable infiltration agent for the Ing. Already quite durable, the addition of an Ing parasite makes the creature even harder to destroy.

"A creature with powerful jaws that will pick up anything that comes near, including the ball." 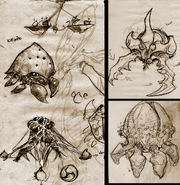 Concept art of an "Icemite" creature for Echoes, that may represent a variant of Triclops.