Contains the final Metroids in Tourian

The triple-tiered room is a room in the first Tourian. It appears in Metroid: Zero Mission.

Unlike other rooms in the Zero Mission Tourian, this one does not have a precursor in the original Metroid. The same tall shaft that precedes this room in Zero Mission is present in Metroid, but it connects directly to the hallway that succeeds it, while the Save Station is not present since the original game used passwords.

As the name implies, this room has three levels, or "tiers", separated by floors consisting of Bomb Blocks. Deploying a Bomb causes the entire floor to explode in a chain reaction. There are two doors on either side of the room, including the entrance, and a ledge beneath each one, both of which are connected to the first destructible floor. The doors lock until the seven Metroids in the room are killed.

The third and final floor features two wall-mounted platforms, one of which has another dead Zebesian, with four more on the ground below. Additionally, there are two midair block platforms in front of the wall platforms. The final three Metroids in this room, and Tourian as a whole, are found here. When they are defeated, Samus's first mission objective of destroying the Metroids on Zebes is fulfilled, and she can continue to the Zebesian Command Center to complete her second objective: destroying the Space Pirates' leader, Mother Brain.

The section heading that discusses this room shares its name with a Mini-Game in Metroid Prime Pinball.

205. Metroid Mania (Page 74)
"You'll fight several Metroids in lower Tourian's triple-tiered room. Start by setting a bomb near the center of the top tier, then roll to the left or right ledge. The bomb will cause a chain reaction that gives you access to the middle tier.

You'll find several Metroids in each of the two lower tiers. Try to take them on one at a time. If one captures you, roll to the left or right side of the room and free yourself by using bombs. Be careful, though - if you use explosives in the center of the middle tier, you'll blast through to the bottom of the room and expose yourself to more Metroids prematurely." 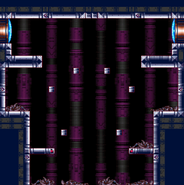 Full view of the room.
Community content is available under CC-BY-SA unless otherwise noted.
Advertisement