Known for the viral disease 'Twin Fever'.
Twin Tabula is a planet that orbits around FS-176 (seemingly occupying the second, third, and fourth orbits at various times in a single revolution). It and Tallon IV are the only two planets in this planetary system to have no natural satellites.

Profile: Planet is best known for 'Twin Fever', a disease caused by a viral strain native to Twin Tabula. In the early stages of the disease, victims suffer from double vision. When the 'twin sight' fades, the victim is near death".

Tabula was a boardgame in the tables family, and is generally thought to be the direct ancestor of modern backgammon. It also refers to a "tablet" or "slate" for inscribing on, in Latin. 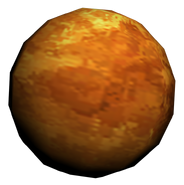