The Universal Bounty Hunters T-shirt is a shirt released in promotion of Metroid Prime 2: Echoes. It was a free shirt offered to those who preordered the game from retailers such as Circuit City, Game Crazy, GameStop, and Electronics Boutique, beginning from October 11, 2004. The shirt is produced by Anvil and is olive-green in color. It is approximately 26.5 inches from the collar to bottom hem and 22 inches wide. The front of the shirt features a Samus nametag on it, and the back of the shirt features the words "Universal Bounty Hunters: Saving the universe, one planet at a time." The words are bordered by a white square, with the game's logo above them surrounded by an oval. The text resembles a 1970's-styled font.[1] Today, the shirt is a collector's item. 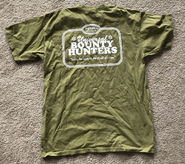 Back of the shirt.

Kynan Pearson wearing the shirt. Photographed by Matt Manchester: [2]
Add a photo to this gallery

Retrieved from "https://metroid.fandom.com/wiki/Universal_Bounty_Hunters_T-shirt?oldid=260449"
Community content is available under CC-BY-SA unless otherwise noted.