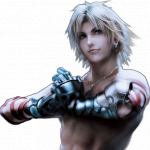 Please note, this page has been copied and pasted from my account on the Final Fantasy Wiki, so some things may seem a little strange. Thank you.

Hey everybody! I am TidusTehSacrificer357, and I welcome you to my page!

I was first introduced to Metroid by my older brother, who played both the Original Super Smash Bros. and Metroid Fusion on his Nintendo SP. I don't have either on their respective consoles, as he still owns them, but I have both on an emulator. I also have Metroid Prime 3: Corruption for Wii (not the series, just the game alone). I have beaten Fusion and Corruption, with Fusion being my favourite.

Tidus is my favourite character, obviously. Probably because our personalities are so similar. I tend to get emotional or angry easy, I hate my father (he hasn't disappeared at sea yet, but I'm waiting for the day), and I love water sports. I tend to be a bit of a fanboy, and sometimes come across as aggressive, but usually I'm a pretty nice guy... Enough about my personality. I mostly follow the Final Fantasy wiki, but I also edit on:

I suck at personlization with coding (kinda), but I have really clued-up friends to help me out :D You need a strategy, some quotes, anything, I'm up for it (Unless I hate you, of course.). >:3 As you can see, I am a big fan of Final Fantasy. Most epic RPG ever made, just better than The Elder Scrolls (Skyrim is catching up fast, though). If you need anything done, just ask and I'll be happy to point you to someone who can. >:) I'm always up for talk, so just leave a message and I'll get back to you. Games currently playing: Final Fantasy X (Of course), XII, XIII (again), KH II (Thinking of making a walkthrough), The Elder Scrolls V: Skyrim, Assassin's Creed II and Brotherhood, and old Nintendo 64 and GBA games like Super Smash Bros, Legend of Zelda: Ocarina of Time, and Metroid Fusion.

I have a sandbox, but be warned, there isn't much there.

My Accounts: Youtube - TidusTehSacrificer PlayStation Network - TehBlackestEmo (I don't go on this often, so don't get insulted or anything if I don't reply.)

Come vote in my arena, the Fayth's Dream!

Retrieved from "https://metroid.fandom.com/wiki/User:TidusTehSacrificer357?oldid=163732"
Community content is available under CC-BY-SA unless otherwise noted.