'Ello, I am Tucker's creator. Who is Tucker? Why, he is the lead star of the coming series Tuck Talk and I am his creator (co-creator, to be exact, I work with a fello' named Poof Junior) I hope to enter filmmaking and I have many film writing projects I am working on currently.

Metroid Zero Mission was the first game I ever played. I mostly forgot about Metroid after that, concentrating more on the Mario franchise, but in the past three years, following the release of Metroid Prime Corruption, I've had a rejuvenated interest in them. I am an avid researcher and thus I know more about Metroid than several people I know who have played twice as many Metroid games than I have. I hope to be able to contribute to the this wiki a good deal, as it is still relatively young and small. My hope is that this wiki can become as respected and as influential as major wikis like Wookiepedia. You'll often find me here on this wiki engaged in intelligent debate with the others, as debate and discussion are great ways to get both your own wrong ideas and others cleared out. 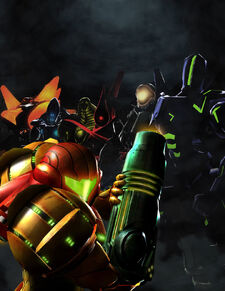 While editors like ChozoBoy, Dazuro, and Hellkaiserryo 12 are taking care of daily work on the site, I'm going to devote my time on this wiki to "sweeping" the articles here, starting with the Editor's pick articles. My current projects are:

1. Writing the page History of the Space Pirates. Done

2. Adding sources to the History of the Space Pirates. 20% complete