Visor Select is the method of selecting Visors in Metroid Prime 3: Corruption, New Play Control! Metroid Prime and Metroid Prime 2: Dark Echoes, and Metroid Prime Trilogy. By pressing and holding the minus button on the Wii Remote, a circle stretching out to make three sections beside it appears on the screen. The Wii Remote must be aimed on the particular Visor desired, and then the button released to toggle the Visor. This also applies to Beam or Weapon Select, the equivalent for Beams, which are toggled with the plus button (in Corruption, this toggles Hypermode and all beams are stacked).

In the original GameCube versions of Prime and Echoes, pressing different buttons on the D-Pad and toggling the C-Stick in different directions was how the Visors were selected.

Beams can also be selected in Metroid: Samus Returns. While the Wave and Plasma Beams stack with the Power Beam, the Ice Beam is a separate weapon, as is the Grapple Beam. 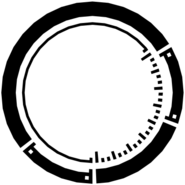 The Power Beam symbol as seen in Echoes

The Annihilator Beam symbol
Add a photo to this gallery

Add a photo to this gallery
Retrieved from "https://metroid.fandom.com/wiki/Visor_Select?oldid=278552"
Community content is available under CC-BY-SA unless otherwise noted.