Wall Jump Surfaces are special walls that Samus can use to ascend, with the abilities of the Screw Attack. They appear in Metroid Prime 2: Echoes and Metroid Prime 3: Corruption. They always are in pairs, parallel to each other, to facilitate a continuous Wall Jump. The motion is almost identical to the Wall Jump of 2-D Metroid titles, which can be done off of almost any wall.

The Surfaces have different appearances in both games. In their initial appearance, the panels are a pale yellow colour with various brown spots on them. Their appearance in Corruption is much different, they have an emerald green, marble-like surface that shimmers.

System: Wall Jump Surface
Area designed to work with Screw Attack.
Perform Screw Attacks while facing and touching this wall to do a Wall Jump.

This surface was designed to be used in conjunction with the Screw Attack system. Perform Screw Attacks while facing and touching wall to do a Wall Jump. 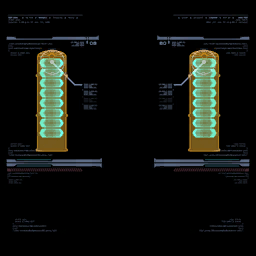 This surface was designed to be used in conjunction with the Screw Attack system. Perform Screw Attacks while facing and touching the wall to do a Wall Jump.

"Screw Attack toward the surface to begin a Wall Jump."

Rotella render of the Imperial Caverns where the Surface has a sun pattern.

Rotella render of the same room where the Surface has a red "lava" pattern.
Add a photo to this gallery
Retrieved from "https://metroid.fandom.com/wiki/Wall_Jump_Surface?oldid=276744"
Community content is available under CC-BY-SA unless otherwise noted.