Warrior Ing are powerful foes, exercising fusion attacks, along with various kinetic offensives and transdimensional energy blasts. At close range, their razor-sharp limbs serve as weapons. They can change into their gaseous form (the "Black fog") at will, in order to possess other organisms. Warrior Ing are also able to transform into a liquid state, allowing them to traverse any surface with ease. When these "shadows" are struck with light energy, their moving speed will dramatically increase.

The emaciated, black-purple bodies of Warrior Ing bear the vaguest resemblance to a predatory animal, with five spider-like legs. Despite all of their limbs seemingly being razor-sharp, only the three front legs are commonly used for melee attacks. Their only visible sensory organ is a cluster of red and yellow particles which glow within a cavity on the upper-most region of their bodies; some artwork depict the cluster being contained within a glossy, pitch-black "eye".

Warrior Ing are often found in large numbers around rooms containing Sky Temple Keys. Warrior Ing live on Dark Aether and when a Light Beacon or Light Crystal is shot with the Annihilator Beam, they will be drawn to the fatal environment.

Eleven Warrior Ing attacked Samus in the Portal Site at the beginning of the game, with six of them stealing her upgrades and later using them against her in some shape or form: those that stole the Space Jump Boots and Boost Ball without possessing another creature later appeared as bosses and had been slightly mutated by the items; they were the Jump Guardian and Boost Guardian. The other four Warrior Ing ultimately ended up possessing creatures (an Alpha Sandigger, a Grenchler, a Pillbug and a Sporb, respectively). They were all killed by Samus later on. The status of the eleventh Warrior Ing that stole Samus's missile launcher is unknown though it is seemingly the Ing that possessed the dead Missile Trooper.

Warrior Ing are challenging foes. They can render themselves into amorphous puddles and move over most terrain, including walls. Warrior Ing can turn their bodies into dangerous projectiles sheathed in dark energy. The tips of their legs are razor sharp, making them formidable in melee. Finally, Warrior Ing are capable of channelling transdimensional energy and firing it at their enemies. Their only real weakness is bright, pure light, which they hate and fear.

Samus' first encounter with the Ing.

Hologram of a Warrior Ing, projected by U-Mos to show the form of the enemy to Samus.

Another hologram by U-Mos to tell Samus that the Ing will certainly attempt for revenge.

A Warrior Ing appears in the Dark Agon Wastes.

Warrior Ing at the Battleground

A Warrior Ing during the destabilization of Dark Aether. 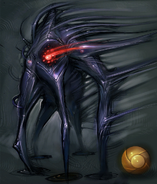 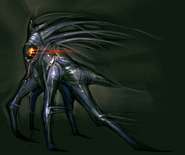 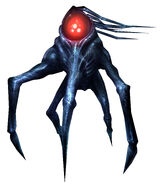 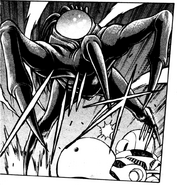