Wikitroid
Register
Don't have an account?
Sign In
Advertisement
in: Articles with non-canonical information, Obstacles, Substances,
and 38 more
English

For other uses, see Water (Disambiguation)

Water in Metroid games is a completely harmless substance often encountered by Samus during her adventures. It does not appear to be any different from water on Earth, and is mostly found in aquatic, underwater areas. Sub-zero and other non-aquatic/cold areas are also known to have quantities of water.

The life-support systems in Samus's Power Suit allow her to survive underwater almost indefinitely. However, she cannot swim, nor can she move quickly, jump high, or use the infinite Bomb Jump, Speed Booster, and Space Jump underwater before she gains the Gravity Suit in most games (the Gravity Boost provides a similar effect in Metroid Prime 2: Echoes). This also applies to her movements in acid, lava, and any other liquids in the games. In Metroid: Other M, Samus cannot fire her weapons as quickly as on land until the Gravity Feature is obtained and all of her other movements, such as turning the Morph Ball, are slowed as well. Water in the Cryosphere notably had a purple hue, likely a reflection from the ice that made up much of the sector.

In Metroid Dread, some areas of ZDR – particularly Artaria – have puzzles involving draining or flooding rooms of water in order to progress. The new Slide and Flash Shift abilities do not function underwater prior to obtaining the Gravity Suit. However, unlike in previous games, the Spin Boost and Space Jump do function but cannot gain more height over the first jump, and are used to travel large horizontal gaps. The mobility impairment also notably affects the E.M.M.I., particularly the 06WB model; it is slightly easier to Melee Counter that model if it catches Samus while underwater. Because the areas of Burenia and Hanubia are under constant rainfall, some areas have windows with raindrops pooling on them.[1]

The Metroid instruction manual on page 19 refers to acid as water and warns that if Samus falls into it, her energy will be drained. This is referenced by Victory Techniques for Metroid and Money Changes Everything, which both depict Brinstar with pools of deadly water. The error was corrected in Metroid: Zero Mission, which refers to the yellow substance as acid.

In Metroid Prime, the water of the Chozo Ruins was poisoned by a massive plant beast known as the Flaahgra, which had grown to immense size and power after a Leviathan struck the planet. The poisoned water was similar to acid in nature and drained Samus's health upon contact. The water was purified after the Flaahgra's defeat.

In Metroid Prime Hunters, Samus enters a room called the Drip Moat, which contains a large abyss that can only be crossed with an Elevator. If Samus were to fall, she would end up in a pool of what appears to black, hazardous water, and she would have to get back up with a Jump Pad.

Due to Dark Aether's highly toxic nature, Samus found dark water there instead of normal water. This substance was similar to the poisoned water of the Chozo Ruins, but was far more potent and an opaque, murky purple in color. The effects of Dark Water could only be nullified with the use of the Light Suit.

In Metroid: Other M, water was hazardous to Kyratians as they had artificial structures imbedded into them producing electrical charges. Therefore, if a Kyratian entered water, its equipment would short out and explode.

In Metroid Fusion, when Samus first arrived in Sector 4, several rooms contained pools of water that were being electrified by broken power nodes. Upon reaching the Pump Control Unit, Samus lowered the water level to below the broken nodes, rendering the water safe to travel in. In the same game, once the X had infected the B.O.X. Security Robot, Samus had to travel to Sector 6 to destroy it. When she battled it, the B.O.X.'s electrical components electrified the water in a similar fashion, until she exposed its Core-X.

In Metroid EX chapter 6, Samus and her friends Joey and Diesel come to an ocean world, the ocean of which is composed of concentrated sulfuric acid. Samus discovers the source to be a massive sea beast, Rastodon. Samus destroys it, and the townspeople say that the ocean will begin to return to normal.

Metroid Prime (Root Cave)
"These water droplets seem to be stopping in midair."

No water is encountered in Metroid Prime 3: Corruption other than Bryyo's rain. An unspecified designer wanted to include water in a single room with an expansion or power-up, where Samus would have to go underwater to collect it. This was prevented by Jack Mathews and other engineers, since it would have meant writing an additional locomotion system for Samus when she is underwater.[2]

Rain and waterfalls at a lake in the Tallon Overworld Landing Site. (Metroid Prime)

Message when underwater without the Gravity Suit. (Metroid Prime) 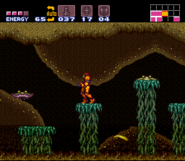 Waterfall at a Biosphere site. (Metroid: Other M)

A pool of water that can be drained in Artaria. (Metroid Dread)

Water in Brinstar (Money Changes Everything)