This article is about the room in Area 5's lower level. For other uses, see Water-filled room (Disambiguation).

Connects purple liquid tunnels to the rest of Area 5

The water-filled room[1] is a room in Metroid II: Return of Samus and Metroid: Samus Returns.

The water-filled room is located in the lowest level of Area 5 of SR388 and is explored during Samus Aran's mission to exterminate the Metroids. This room marks the entrance to Area 5 where Samus leaves the purple liquid tunnels, emphasized by a different music track that starts playing in this room: an ambient theme in Return of Samus, or Area Indefinite in Samus Returns.

In Return of Samus, the water-filled room does not actually contain any water, which is seen a few rooms later in the Grand Cavern. It is a simple Pincher Fly-infested vertical shaft composed of natural rock, with some stalactites hanging from the roof. Although the next room contains a Gamma Metroid, its Metroid Husk is not found in this room (instead located in the Grand Cavern), making its encounter a complete surprise.

In Samus Returns, the water-filled room has been redesigned to match the jungle and marsh theme of Area 5. For the most part, the water-filled room appears to be a natural cavern with a jungle habitat, populated by magenta trees, pink mushrooms, and large green vines, branches, and roots. However, there are a few artificial structures visible in the room, most notably including a Teleport Station. As the name indicates, it is also flooded with water, with several small waterfalls pooling at the bottom of the cave.

The water-filled room is also heavily expanded. While it is largely a linear path from one door to the other, it winds left and right as it ascends. At one point, Samus is forced to pass a Fleech Swarm and run quickly to the next pool of water. Samus can also use her Grapple Beam on a Pull Block, revealing a shortcut to the purple liquid tunnels.

Missile Tank
In Samus Returns, near the Teleport Station and Metroid Husk, Samus must plant a Bomb on a wall to reveal a secret passage, which leads directly to the Missile Tank. 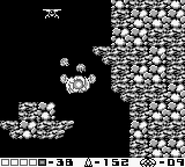 A Pincher Fly in Return of Samus

Samus attacked by a Fleech Swarm in Samus Returns

The Teleport Station in Samus Returns

The Missile Tank in Samus Returns

Retrieved from "https://metroid.fandom.com/wiki/Water-filled_room_(Area_5_lower_level)?oldid=273344"
Community content is available under CC-BY-SA unless otherwise noted.