Watery Hall is a room in Metroid Prime in the Chozo Ruins. This room contains the Charge Beam which is blocked by a large gate and can only be opened by scanning the four Runic Symbols around the room and then a final one on the gate itself. After the Charge Beam is acquired, many Eyons on the walls activate and block the exit.

The water that covers the floor here is toxic before Flaahgra is defeated, so the high ledges along the walls must be used to reach the other end. A few lower ledges house Blastcaps and some crates, and a ledge underwater allows access to a Missile Expansion. There is a piece of Chozo Lore behind the Charge Beam that can be scanned; and, nearby, a Morph Ball hole in the wall is blocked with Sandstone. This leads to the Dynamo Access door.

A Secret World can be found in this room: [1]

The room's Reaper Vine holes have an unused scan associated with them.

Charge Beam
This is reached by scanning four runic symbols and getting through the gate at the opposite end of the room.
Missile Expansion
To acquire this, the Gravity Suit is required. It is found by walking underwater, to a ledge roughly across from the Charge Beam's location. The expansion is found past this by jumping up it. 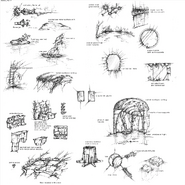 A root that thrives on the toxic water.

Samus scans a sculpture that once provided water.

The gate that protects the Charge Beam.

Samus observes one of the runic symbols.

The area is defended by several Eyons after Samus gets the Charge Beam.

Tom Papadatos render displaying an early version of the room. Notably, there are more platforms, leading to an additional door at the room's north side.
Add a photo to this gallery

Retrieved from "https://metroid.fandom.com/wiki/Watery_Hall?oldid=273750"
Community content is available under CC-BY-SA unless otherwise noted.