Wikitroid
Register
Don't have an account?
Sign In
Advertisement
in: Featured articles, Pages in need of images, Beams,
and 13 more
English

Mandatory item, found in the Chapel of the Elders.
The Wave Beam (ウェイブビーム, Weibu Biimu?), named so for the oscillating "wave energy" it fires,[1] is a beam that Samus acquires in most games, with the exceptions of Metroid Prime Hunters, Metroid Prime 2: Echoes, and Metroid Prime 3: Corruption (though she gains the Annihilator Beam in Echoes, the Volt Driver in Hunters, and both the Grapple Voltage and the Nova Beam in Corruption, which all share a few similar properties with the Wave Beam). It fires wave energy (often in the shape of a sine curve) that can usually go through walls.

In Metroid and Metroid II: Return of Samus, the Wave Beam generated a single bolt that moved forward in a helical manner and passed through walls. It also acted as such in Super Metroid, but simultaneously using the Wave Beam with either the Charge Beam, the Spazer Beam, or the Plasma Beam shoots multiple bolts that move in a helix. It was one of the more powerful beam weapons.

In Metroid: Zero Mission and Metroid Fusion, the Wave Beam was a beam that could go through walls. In these games, it stacked on to the beams that Samus had acquired thus far. In Super Metroid, it could be added to any other combination of beams to make them go through walls and give them a helical trajectory, or be used alone, making a purple waving ball. In Metroid Fusion, it adds a wall penetrating effect to the already-acquired Charge, Wide, and Plasma Beams. In Zero Mission, it added a widening effect and a wall passing effect to whatever beams Samus has by that point (Samus could actually obtain the item without any other beams, but she could have the Ice, Charge, Long, and even Plasma beams by then, due to the game's non-linear nature). On its own, it has a white colour with a slight purple hue.

In Metroid Fusion, this upgrade was possessed by the haywire robot B.O.X., during its second appearance. This is the second to last beam achieved by Samus on BSL Station, before the Ice Beam. It is also implied that the SA-X also had this beam in its' possession in addition to the Ice Beam due to its beam shots penetrating walls similar to the Wave Beam. If acquired first through debug, the beam will actually take the other beam functions due to it being the last beam in the intended sequence. As the sequence is hard-coded alongside events, it is not accessible without the other beams.

In Metroid: Other M, the beam fires three purple undulating shots at once, similar to in Prime. Other M's Wave Beam also has similar properties in the 2D games; bypassing walls. However, it is only limited to "transparent and semitransparent" objects, such as glass.

In Metroid: Samus Returns, a remake of Metroid II, the Wave Beam can now stack with all Beams, with the exception of the Ice Beam, which is a separately selectable weapon. The Wave Beam is required to destroy the Taramarga, a door-blocking creature equipped with a sturdy rock. Notably, it lacks any undulating firing pattern, instead resembling Other M's straight firing Wave Beam.

In Metroid Dread, the Wave Beam is in possession of E.M.M.I.-06WB, which is using the powerup to enhance its field of vision and shoot stunning projectiles that can penetrate through walls. Like Fusion, it is the second to last beam upgrade in the game, the last being the Hyper Beam. It can destroy Wave Beam Covers.

In Metroid Prime, the Wave Beam takes on a different role. Here, it is one of the three "elemental" beams, representing the element of electricity. It is the first beam Samus acquires on her mission to Tallon IV (excluding the Charge Beam). The Wave Beam does not go through walls. However, if the player is locked on to an enemy, the beam has a homing feature that can follow an enemy around until it hits. The Wave Beam is acquired after defeating an Adult Sheegoth in the Chapel of the Elders, located in Phendrana Drifts. When fired normally, it launches three separate rounds that undulate inwards and outwards continuously with impressive homing capabilities. When charged, it fires a slower-moving single round that, when used on a few certain enemies, can cause a stunning effect. Its uses outside of battle include energizing Power Conduits and opening Purple Doors. It is the only weapon that can destroy the Pulse Bombu and the Scatter Bombu. On a related note, the Wave Beam can used on certain machine based enemies to cause them to ultimately malfunction. If the Wave Beam is used to destroy an Auto Defense Turret or a Mega Turret, the turret will swivel and constantly fire out of control before exploding. If used on a Sentry Drone, it will come crashing down instantly to the floor when defeated instead of performing its usual explosion.

Also in Metroid Prime, the Wave Beam can be upgraded with a Charge Combo called the Wavebuster. This allows Samus to fire a perpetual wave of electrical energy at an enemy, and like the normal beam it has a limited homing feature, but doesn't require a lock-on. However, its range is somewhat low. This attack uses up ten Missiles to activate and uses five Missiles per second when holding the fire button. Although it has an extreme ammunition cost with less damage-per-missile than the Super Missile, it deals damage at an incredible rate, making it valuable for quickly defeating enemies in a pinch.

Most forms of destructive energy in the universe are carried by electromagnetic waves, making the concept of a "wave beam" somewhat redundant. However, its abilities seem to stem specifically from this wave-based nature in particular, drastically increasing the wavelength of an energy beam to within the VHF radio range would expand the area it covered and allow it to pass through most solid obstacles. This technique is well-known to terrestrial science and is commonly used to prevent solid objects from obstructing music and television broadcasts.

Like the Volt Driver, this version of the Wave Beam appears to fire some form of artificial ball lightning, a self-sustaining globe of electrical energy that is occasionally reported to "follow" living creatures and very rarely detonates with explosive force when touched. Although reliable eye-witness accounts confirm ball lightning's existence and similar phenomena have been produced using a wide variety of technological methods, its exact nature and cause remain unknown. Ironically, most explanations of ball lightning do not relate the phenomenon to electromagnetic waves in any way.

The version of the Wave Beam seen in Metroid: Other M is very similar to the two-dimensional version, but its lower radius and ability to pass only though transparant materials suggests the beam now operates in the visible spectrum, as opposed to radio.

"The beams are wave-shaped and are stronger than normal beams. If you already have a long beam, the long beam will become a long wave beam."

"This beam flies in a wave pattern and is more powerful than the normal beam."

"This is a powerful weapon. This beam travels like a wave, and destroys in all directions. Also, it has the power to penetrate and destroy obstacles."

"The beam travels in a wave shape. It is a very powerful beam and has a wide range of effect."

"The Wave Beam sends out a charge in a wavy pattern and pierces some obstacles."

"Shoots in a wavy pattern and is more powerful than the Ice Ray.
Location: Norfair.

"The Wave Beam fires a triple blast of electrical energy, which is very effective against certain enemy types. Also can be used to restart inactive power systems. Combine with the Charge Beam to increase effectiveness."

"The Wave Beam fires three oscillating waves of energy. As with the other beam weapons, the Wave Beam is especially effective against certain enemies and can be powered up once Samus finds the Charge Beam. The Wave Beam also features a limited homing effect."

then point up to select the Wave Beam as your active weapon.

Fire the Wave Beam to open Purple Doors.
The Wave Beam won't home in on targets without a lock-on. Press and hold

to lock on.
Charge the Wave Beam to fire a fierce electric blast. Enemies struck by this blast will be enveloped in electrical energy for a few moments.

"Shoot through obstacles with this undulating beam."

"This allows Samus to fire beams of energy waves that penetrate solid objects."

"This beam, which is made up of energy waves, can pass through solid objects."

"Adds the ability to penetrate transparent and semi-transparent objects. This powerful beam can also be shot as a Charge Beam."

"Effect: Increases damage.
Secondary effect of penetrating materials that are transparent or semitransparent."

WAVE BEAM
"Fires energy waves that travel in a spiral path and go through walls."

"The Wave Beam's energy waves can pass through solid objects."

The Armory (p. 11)
"The Wave Beam defies spatial physics to allow Samus to fire through solid objects. This is handy in its own right, but combine that with the fact it's also a damage upgrade over the standard Power Beam and you may find yourself forgetting the Power Beam ever existed."

Walkthrough (p. 75)
"The Wave Beam can shoot through solid objects and pierce enemies. It's a replacement of your basic Power Beam, and it's certainly more effective. Use it to get through the pink Taramarga doors and to hit enemies from safer locations." 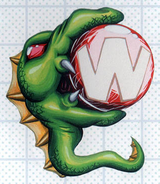 The Wave Beam upgrade as seen in 2D Metroid titles.

Unused Fusion sprites of the beam weapons suggest they may have been obtained through Chozo Statues instead of fighting a special Core-X in beta versions.